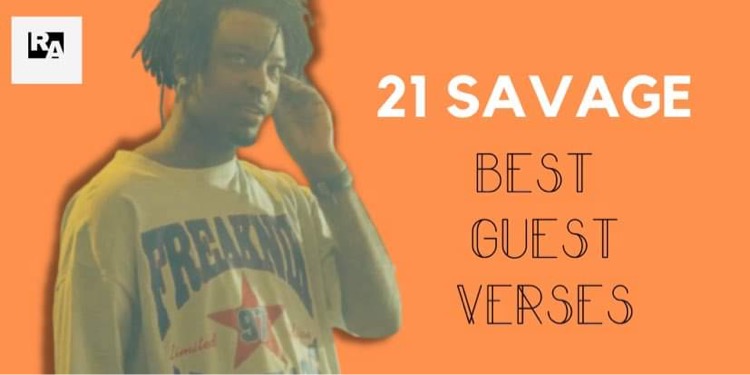 The word on the street is 21 Savage never misses on features. The Atalanta rapper has continuously subverted expectations and is now considered one of modern-day rap’s go-to collaborators. In this featured article, we explore his life, how he earned his title as a feature god, and also list some of his best guest verses.

Before becoming one of trap music’s brightest stars, 21 Savage had to earn his stripes just like any other rapper. Born in London, 21 Savage whose real name is Shéyaa Bin Abraham-Joseph moved to Atlanta, Georgia with his mother at the age of seven. Savage landed himself in lots of trouble while growing up and was usually in and out of school. After being permanently banned from every school in DeKalb County School District for gun possession, Savage joined a local street gang affiliated with the wider Bloods gang and became a full-time drug dealer.

During his teenage years, he was involved in several criminal behaviors, including selling cannabis, robbery, and grand theft. Following the death of his best friend, Johnny in a shootout with rival gang members on his 21st birthday – a day on which he was also shot six times – 21 began rapping as a way to document the violent and criminal aspects of his life.

While he released his debut mixtape, The Slaughter Tape in 2015, he had to wait another 12 months to attain mainstream success.

On July 15, 2016, Savage teamed up with Atlanta-based record producer Metro Boomin for “Savage Mode” EP. The EP gained international success and peaked at number 23 on the Billboard 200, which remains their highest charting EP to date. 21 Savage’s profile also later increased with a guest feature on Drake’s 2016 single “Sneakin'” from his album More Life.

In 2017 he signed to Epic Records where he released his studio debut album – Issa Album. That same year he earned his first number one record with a feature on Post Malone’s single “Rockstar.”

Since releasing his debut mixtape in 2015, Savage has created a cult following and has managed to maintain a high proficiency when it comes to features. His status as a feature god was enhanced in 2021 with stellar guest verses on songs with major rap heavyweights including J. Cole, Drake, Nardo Wick, and more.

A new album from “Mista body catchaa” is long overdue. While we continue to wait for his next official project, Let’s take a look at some of the key moments that shaped his life, while also highlighting some of his best guest verses. In no particular order.

Nas extended an olive branch to 21 Savage on “One Mic, One Gun” after the Her Loss rapper seemingly questioned his relevancy in today’s hip hop.

The rap titan tipped off fans to the release on Instagram, writing, “Only way we moving is with love, respect and unity. The foundational principles of hip hop. Excited to collaborate with my young brother and I hope more artist use turbulent moments and turn them into a time to make new art. That’s what it’s about.”

Over Hit-Boy’s triumphant horns, 21 opened the track with a positive message that referenced his alleged disrespect of the Queensbridge legend.

“When you turn a legend, no such thing as relevance/They must’ve forgot that I’m a new rapper that got integrity,” raps 21. He later adds, “I ain’t going against no legend / I’m tryna be next in line.”

“Rockstar” was released as the lead single from Post Malone‘s second studio album Beerbongs & Bentleys, and was also the first song to truly propel Savage into the limelight. The song’s arrival was timely as the Atlanta rapper had just released his debut album to critical acclaim. His stock was on the rise, and he was starting to feel like, well… a rockstar. On the track, Savage embraces his new lifestyle as a superstar and the pleasures that come with it.

Having collaborated on songs such as “Isaa” and “Offended,” Young Thug and 21 Savage continued their chemistry on “Now” from Thug’s 2018 EP Hear No Evil. Both rappers hypnotically ride the DJ Spin beat using a catchy-punctuated flow made popular by the likes of Chief Keef and Lil Uzi Vert. Each rapper reflect on their journey and boast about their wealth: “My earrings cost more than a nigga life savin’” raps Savage.

“Box Of Churches” was one of the standouts on Pooh Shiesty’s 2021 album “Shiesty Season.” On the track 21 Savage raps about his upbringing and life in the streets. He speaks about his adulation for guns (“I don’t wanna rap ’bout nothin’ but gunplay”) and sliding on his opps (“Catch him at a light, we gonna leave him on a one-way”).

21 Savage joined Lil Durk, G Herbo, and Nardo Wick on the confrontational “Who Want Smoke.” The track’s menacing theme was the perfect backdrop for Savage to spit his gun-obsessed raps. All four rappers hurl threats at their opps and get graphic with their verses.

“Knife Talk” was originally intended to appear on 21 Savage and Metro Boomin’s 2020 collaboration album Savage Mode II, but was instead featured on Drake’s sixth studio album “Certified Lover Boy.” The track is a nod to horrorcore and finds Drake and Savage in villainous mode. Over Metro Boomin’s ominous production, the two rap about their gang fantasies except one of them really lived it.

The Coupe-produced song appears on Young Nudy’s DR. EV4L album, which arrived in May with other features from Lil Uzi Vert and G Herbo.

“Big 4L, pussy, spray the block down, turn the car ’round,” 21 raps in his verse. “When we come around, shells on the ground/Strip a n-gga, now his pants on the ground/Wrong move leave your mans on the ground.”

21 Savage has come a long way from the streets of Atlanta. On My Life from J. Cole’s The Off Season album, Savage raps about his troubled childhood. He begins his verse by reflecting on the death of his best friend Johnny B and how the tragic occurrence led him to develop a strong character.

Say what? The stuff that I’ve seen got me traumatized
I let the K go when Johnny died.

In spite of his graphic lyrics, Savage continually indicates throughout his music that he possesses a certain level of self-awareness. He gives all the props to his momma for always protecting him and blames the absence of his father for everything he faced growing up.

21 Savage has so many bad habits, and a huge part of his aura includes not giving a fuck. He uses his verse on “Hibachi” to outline the heartlessness he formed growing up, as well as rhyming about his activities in the bedroom.

“Bartier” is a reference to the French luxury goods company, Cartier, which is well known for its jewelry and watches. On “Bartier Cardi” Cardi B and 21 Savage compare themselves to the luxury brand while boasting about their lavish lifestyles.

21 exudes an effortless charisma on here and embodies the cocky aura of a newly minted star as he raps about his luxury items: “All these VVSs, n***a, my sperm worth millions”. The song is the first collaboration between the pair.

“Pass Out” is one of the best collaborative efforts on QUAVO HUNCHO. 21’s verse here is undeniably one of his best as well. His flow is catchy, the trademark ad-libs are as sharp as ever, and the lyrics are a string of clever one-liners that include references to everyone from Will Smith, Diddy, and Drake to Shiggy, Mickey Mouse, and Ricky from Boyz n the Hood.

A remix of BlocBoy JB’s first mainstream hit, “Rover 2.0” finds 21 Savage’s perpetually cool demeanor act as the perfect foil to JB’s unbridled energy. “Salt kills snails, not players,” he raps in a matter-of-fact manner, maintaining his composure even when delivering the deadliest of threats. The whole verse plays like a warning shot from Savage to an unnamed rival.

While Rick Ross naturally brags about his luxurious lifestyle on Outlawz, 21 keeps it disrespectful with his gang talk and explains how his harrowing past filled with poverty, drugs, and gang violence left him scarred.

On “Bout A Million,” which also features 42 Dugg, 21 Savage raps about his luxuries and highlights the importance of loyalty.

Bang, do whatever for the gang (On God)
Nudy gon’ pop out with that stick and I know that he won’t say a name

One of the reasons 21 Savage has been agreeably consistent on features is because he sticks to a formula he knows too well. He basically raps about the same thing (guns, women, guns and did I mention guns?). He never misses an opportunity to express his love for the blicky. On “Sticked Up” he references getting shot six times on his 21st birthday and needlessly talks about having access to several pretty women.

After just having crossed over from self-proclaimed “Slaughter King” to pop-star status, 21’s verse is a charismatic, unfiltered look at the positive turn his life has taken. “Four shows, n***a I can buy a Wraith/My street cred platinum, ain’t nothin’ fake/Pulled up to the Slut Walk with a K/You a internet gangster, I’m a ape,” he raps, referencing his chart-topping successes as well as his relationship with then-girlfriend Amber Rose. Full of venom yet delivered with a joyous nonchalance, this verse is the archetypal 21 Savage verse, a perfect example of all that makes him such a fan favorite.

Under the production of London On Da Track, 21 Savage narrates his rags to riches story. In between lyrics about owning acres, “Sneakin’” finds 21 once again detailing his vices: women, money, and violence.