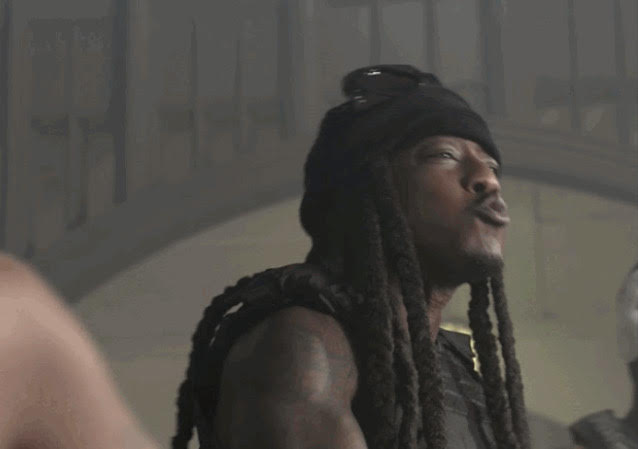 Since reclaiming his independence and setting out on a new path, Ace Hood’s story is best described as one of spiritual, mental, artistic, and physical growth. Today, Ace returns to transform hearts and minds in revolutionary fashion, sharing the poignant new video for “At War,” the standout track of self-discovery amidst social injustice from his recent M.I.N.D. (Memories Inside Never Die) EP, is available everywhere via Hood Nation / EMPIRE.

The Alex Heider-directed “At War” video depicts a version of Ace in stark contrast to the Broward County turn-up trailblazer of old, as he steps into the role of a revolutionary who shepherds his people onto the righteous path. Enhanced by the expressive movement of dancer Vernisa Allen, the video for “At War” sees a black-clad Ace Hood in a church painted with the stained-glass sunlight of the outside world as he stands before a masked militia of armed men and women.

The video, like the track itself, invites listeners to stand with Ace at the intersection of personal and generational trauma, compounded by the ongoing oppression of Black people–in America and in Ace’s ancestral Haiti– throughout history. Facing these seemingly insurmountable obstacles, Ace’s unyielding introspection, ceaseless faith, and remarkable commitment to righteousness comprise the arsenal of weapons that ultimately triumph over his adversity, allowing him to lead the way for others, rapping, “If I’m not aligning with my purpose, I’m not truly happy/I get this s*** here from a source and you can’t mirror match it/Ain’t nothing realer than me healing up this mental damage.”

“There’s a war happening outside of us and within us. A waging war on our mental, emotional and physical being. A constant battle of balance & alignment, light and darkness but yet when we embrace our selves as we are we uncover our true power, said Ace Hood. “Pray for Haiti is a metaphor. It’s a reminder when we are in some of our deepest/darkest moments it takes courage and self-awareness to pull yourself out of any feeling of discomfort or feeling of unworthiness.”

Featuring recent singles like the boldly aspirational, “Glory,” and the glowingly self-assured, “Little Light,” M.I.N.D. marked a fresh, new start for Ace. Enlisting fellow independent veteran and outspoken activist Killer Mike for the project’s sole feature, the project is animated by a clear social message that dissects the mentality required to triumph over personal and generational trauma. Whether he’s celebrating the spoils of his hard-earned self-sovereignty as an artist on tracks like “Living Legend,” or grappling with long-standing structures which serve to deny him that autonomy as a black man on songs like “Free,” M.I.N.D. serves as Ace’s testament to the universal truths found only by looking inward.

“Knowledge is power,” asserts Ace Hood. “The key is to work together to further each other. I speak on a human level because at some point I, or a loved one, have been affected by the issues I speak about in my rhymes. I believe people need a fearless representation of what these issues look like.”