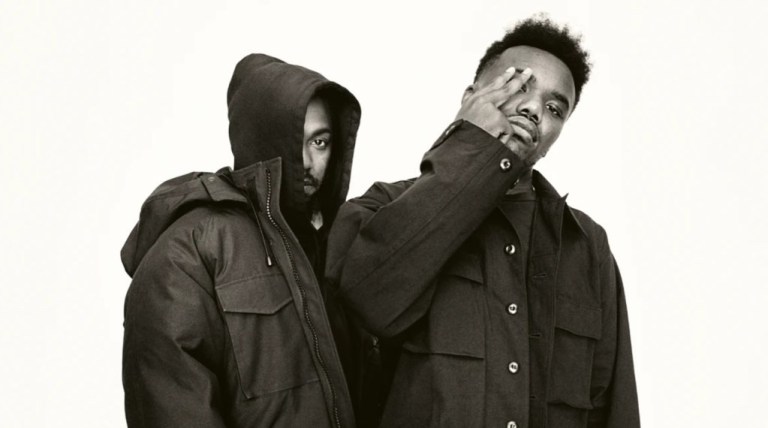 'Savior' is the latest reminder of how the duo effortlessly bounce off each other whenever they hop on a track together.

Baby Keem seems to be the only artist capable of getting Kendrick Lamar to rap on demand. Since the release of DAMN. in 2017, there’s no one that Kendrick has worked with more than his cousin.

The family members worked together on “Family Ties,” “Range Brothers,” and “Vent” from Keem’s 2021 album The Melodic Blue. Keem also joined PgLang, the creative agency that Kendrick Lamar and Dave Free launched in 2020.

The two are yet to miss on records and there have been talks of a possible full-length album between them. While on the red carpet of the 64th Annual Grammy Awards on Sunday (April 3), Keem spoke to Billboard’s hip-hop editor Carl Lamarre about releasing a potential joint project with his cousin.

He also spoke glowingly about their working relationship. “The way we work — the chemistry is there. I think everybody was very instrumental [in making The Melodic Blue], but the Kendrick one is the one I definitely hold close to my heart because it was the first few collaborations that we had. And to be here based on those collaborations is really special to me.”

Prior to that, he told Grammys.com that there was a “50-50” chance of it happening.

“It could happen and it couldn’t, I don’t know. It just really depends on a lot of factors that I don’t have control over. So, it’s just what the world wants. The world wants it, then it can have it.”

Their bond “goes beyond music” with Keem citing Lamar as a huge creative influence. “Whenever I need anything regarding, like, life, and if I need some wisdom, then that’s who I go to,” he told Apple Music. “That’s one of the first people I look towards, him and Dave Free.”

The duo recently teamed up for track fourteen from Kendrick Lamar’s fifth album Mr. Morale & The Big Steppers. The introspective single is the latest reminder of how the duo effortlessly bounce off each other whenever they hop on a track together.

While we wait patiently for them to hopefully decide on a joint album release. Here’s every song they appear on together, ranked.

On ‘vent’ Baby Keem voices out his frustrations in his verses. He theoretically raps about his fame and his displeasure with his friends who are now acting greedy. The chorus and outro are performed by Kendrick Lamar who initially contributed a verse to the original version of the song. His verse was subsequently pulled and partly used in his third verse for N95 from his recent album Mr. Morale & The Big Steppers.

Baby Keem and Kendrick Lamar have fun on Range Brothers. The two rappers change around their flows and cadences while swapping bars about material things, their tough upbringings, sexual prowess, and wealth. Keem recalls growing up in poverty: “I remember roaches, momma lost focus/I was at home, no lights, no food,” he raps. Lamar responds with “F-ck that… let me get some too/Life ain’t always about your name in they mouth/And the cars and the clothes and the jewels.”

Family Ties is the first official collaboration between Baby Keem and his cousin, Kendrick Lamar. Originally titled “Jump 2” the track is split into two distinct halves, with Keem opening the song with a barrage of bars that fly over sharp drums. Keems’s lengthy verse here is one of his best entries. The 21-year-old raps about his cousin opening doors for him.

“I’m grateful to Man-Man, he opened up doors/And bung’ on the tour bus to come and compose,” he raps.

For Lamar’s verse, the beat shifts into something far grittier, as he spits over-grinding synths. The self-anointed “omega” references his relative silence during the COVID pandemic and Black Lives Matter movement.

“Family Ties” won a Grammy for Best Rap Performance at the 2022 Grammy Awards.

Hip Hop fans, and Black people in total tend to depict Kendrick Lamar as a sacred being incapable of fault. While the 36-year-old rapper has alluded to being a prophet and omega in previous records, on “Savior” Kendrick admits to having flaws just like everyone else. Kendrick sheds fans’ perceptions of him. He’s tired of being the voice of a generation and no longer wants to be boxed artistically.

In the first verse, he unapologetically addresses a host of racial issues; in the second, he talks about COVID-19 and political correctness; and, in the third verse, he discusses his own flaws and struggles.

“I am not your savior,” he raps. “I find it just as difficult to love thy neighbors
Especially when people got ambiguous favors
But they hearts not in it, see, everything’s for the paper.”

Baby Keem questions the fake love he gets with a complimentary chorus that asks “are you happy for me?”