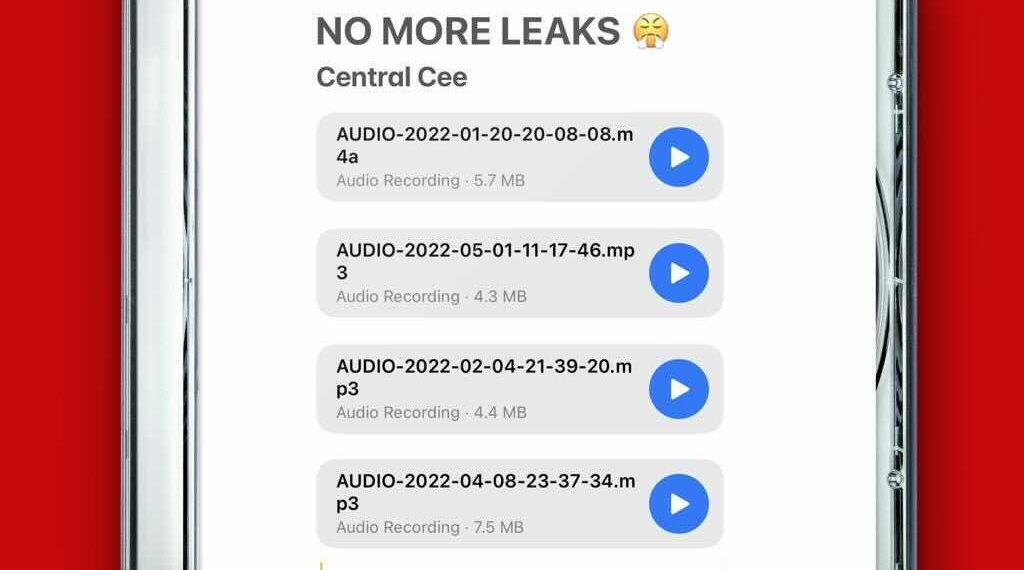 Central Cee serves up a new surprise EP titled No More Leaks, along with a Suave-directed visual for the third track on the release “One Up,” a song that Cench shared a snippet of back in September. “[I’m] only dropping this cos they leaked it.”

The video for “One Up” sits on a newly created ‘Live Yours’ channel – the YouTube home of Central Cee’s record label, of the same name, which will highlight different musical artists from across the globe.

“No More Leaks” opens with the raw, open and honest “Chapters,” a freestyle in which Cench continues to own a sound and style entirely his own, by meshing together his own personal experiences with his ongoing journey. “They think that I came up quick, they don’t know ‘bout the rest of the chapters.” It’s a moment of reflection, of gratitude; but also of power: “I had a big dream from young, some shit that I’ve done I couldn’t imagine.”

An inimitable lyricist with an instantly recognizable vocal, Cench reveals how far he’s come: “The show that I done today, is more than my parent’s life savings.” Constantly growing and learning through his craft, Central Cee’s music has allowed him to travel the globe: “I thought that my life was hard till i went to the orphanage in Lagos,” he explains, reflecting on his first trip to Nigeria, where he played to a packed out stage at Homecoming in Lagos; touched by the enormous and engaged fan response so far away from home.

The EP continues with the aptly named “Bumpy Johnson,” on which Cench touches on his global success and incomparable journey, as well and his focus on making connections and collaborations across Europe: “made a French connection, see the blue print working, now they go Paris as well.” A note to his fellow artists that it’s impossible to recreate his path. His journey is of his design – live yours, not mine.

No More Leaks lands just ahead of the “Still Loading World Tour,” which continues (after starting with dates in Australia and New Zealand) in Madrid, Spain, on October 31st. The tour culminates in London on November 22nd, where Central Cee will play a highly anticipated headline homecoming show at the historic Alexandra Palace.

In Summer 2022, Cench released his viral smash single “Doja,” a track that marked a huge moment, as he became the first ever UK artist to have a video directed by Cole Bennett, and hosted on the Lyrical Lemonade YouTube channel. Since then, “Doja” has racked up over 250 million global streams and Cench became the first UK artist to have the most streamed hip hop track globally on Spotify in one week, also landing a #2 debut on the UK Official Charts.

With an international appeal and high anticipation around his every move, Central Cee is the UK’s hottest and most followed rapper, with a social audience of over 8 million, and an awe-inspiring 2 Billion global artist streams. Transcending the UK rap scene, 65% of Central Cee’s fans are outside of the UK, with him regularly charting across the globe. His recent LA Leakers freestyle has become the second most viewed on their youtube channel this year, with over 3.3 million views.

At the top of 2023, Central Cee whipped up a frenzy with the release of his critically acclaimed 23 mixtape – a project that debuted at Number 1 in the UK official charts, and followed on from 2021’s Wild West, which was the highest selling British debut project of the year.

Accolades are numerous for this high-flying young artist. Following on from his chart-scaling single and platinum viral hit “Obsessed With You,” Cench released a GRM Daily Duppy, which went on to be the highest charting in history. Earning a stellar position in 2022’s BBC Sound Poll, Central Cee consequently received an astounding three Brit Award nominations – for Best New Artist, Best Song and Best British Hip Hop, Rap, Grime act. Not forgetting his feature on the platinum-certified “Overseas” with D-Block Europe, which was one of 2022’s highest selling UK Rap singles.

Central Cee is without a doubt the biggest name of the moment and impossible to ignore.