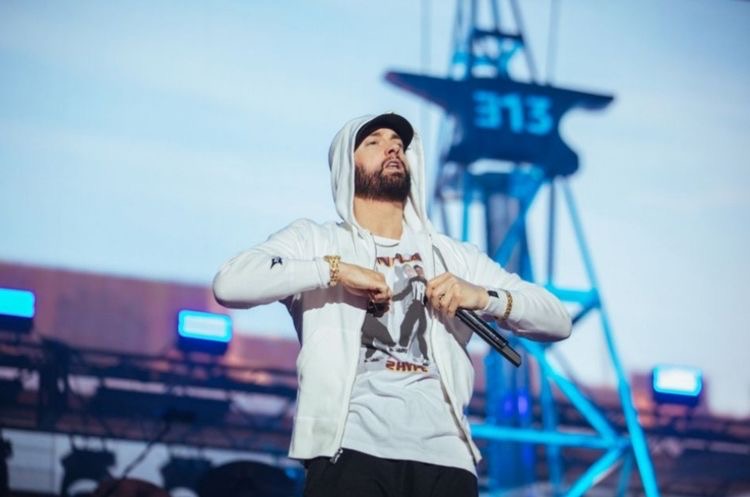 UPDATE: Curtain Call 2 is out now on all streaming platforms.

UPDATE: With a mere 48 hours left before the arrival of Curtain Call 2, Eminem has revealed the complete tracklist for the compilation album. CC2 contains 14 previously released songs as well as three additional new songs.

His unreleased track “Is This Love” with 50 Cent also makes the cut at track 7.

Almost two decades after the release of the first iteration, Eminem has announced the release date for his 2nd greatest hits album “Curtain Call 2.”

The Detroit rap legend revealed on Twitter, Monday (July 11) that the new compilation will release August 4. In addition to the Snoop Dogg-assisted “From the D 2 the LBC,” and “The King and I” with CeeLo Green” from the Elvis soundtrack. Billboard reports Curtain Call 2 is set to include material from Eminem’s releases since 2009’s Relapse; including side-projects, guest appearances and soundtrack songs.

The new greatest hits collection will also feature a previously unreleased song that will be unveiled in the coming weeks.

The announcement comes months after the release of his 20th anniversary edition of The Eminem Show, and is the first Eminem album in several years to be announced in advance: The rapper has in the past opted for surprise releases of his big projects.

The original “Curtain Call 2” arrived in 2005 with hits such as “The Way I Am,” “My Name Is,” and “Without Me.” Snce then Eminem has scored six consecutive No. 1 albums on the Billboard 200, bringing his grand total to 10 chart-toppers. His most recent studio album, Music to be Murdered By, debuted atop the Billboard 200 in January 2020 and spawned the top five hit “Godzilla (feat. Juice WRLD).”

A limited edition box set and autographed vinyl will be available for purchase on Eminem’s official website.