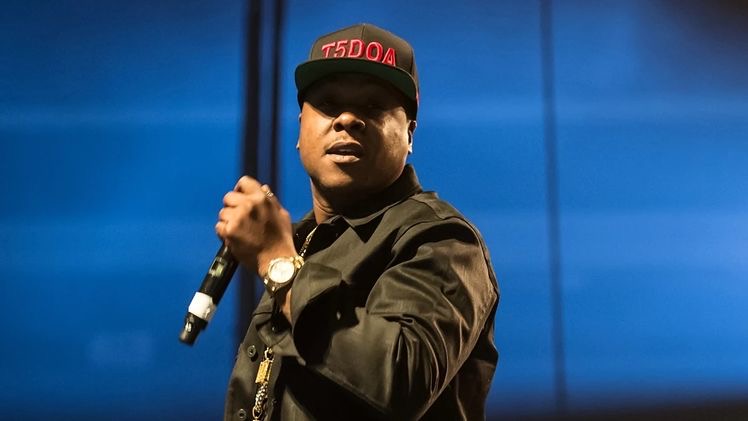 Jadakiss remains undefeated on features. We take a look at some of his best guest verses of all time

20 times Jadakiss showed out in a feature.

Jadakiss reaffirmed his Top 5 Dead Or Alive moniker and reminded viewers why he remains one of the hardest notebook rappers of all time with his live obliteration of fellow New York hip-hop group Dipset, during their Verzuz battle at Madison Square Garden’s Hulu Theater in New York City on Tuesday night (August 3).

Moments after the showdown, hip hop historian, LeBron James declared Kiss “the most underrated hip hop artist of all time!!”

The Yonkers native, despite not having a proverbial classic album to his name still has a healthy collection of commercial hits, underground hood anthems, and freestyles in his arsenal. As a solo artist, Jadakiss has won awards, released top ten singles (“U Make Me Wanna,” “Who’s Real”), and sold multi-platinum albums (Kiss of Death, Kiss Tha Game Goodbye).

Jadakiss remains undefeated on features as well and still holds the title as the only rapper to have never had a wack verse – a feat he alluded to on one of his most recent singles “Me” from his slightly slept on album Ignatius.

“Who started out movin’ that worth?
Put you in a black hearse?
Never had a wack verse?” Kiss asks on the ostentatious song.

Though that’s debatable, Kiss’ status as Mr. Verzuz is not. With more people finally starting to give him his flowers, our latest guest verses spotlight features the New York veteran. In this featured article, we take a look at 20 times Jadakiss has stolen the spotlight on other people’s tracks. Kiss has a plethora of guest verses so pardon us if we missed a few of your favorites.

Jadakiss joins fellow NY veterans: Ja Rule and Fat Joe in this ode to “New York” with a chorus that pays homage to KRS-One’s chorus from the 1990 Boogie Down Productions track “100 Guns.” Cool & Dre produced the track originally for Fat Joe, who passed it down to Ja Rule because the “What’s Luv” Rapper needed a hit at the time and was trying to make a comeback.

“I gave it to him, and I was like, ‘Yo, my nigga, this is crazy.’ And at the time I think I was just cocky, like I just make hits like it’s a joke. Like, ‘Ahh, here, I’ll make another one tomorrow,” Joe told Complex.

Jadakiss’ appearance on the song ended up entangling him into a beef with 50 Cent, who dissed him on his 2005 song “Piggy Bank”.

Mase, Jadakiss, Black Rob, Sheek Louch, Styles P, and DMX offer up how they’d spend their final 24 hours if they, for whatever reason, found out they had only 24 hours left to be alive. While each rapper serves up entertaining verses, Jadakiss delivers the most balanced and well-rounded verse on the song. He touches on some of the best parts of being alive and that includes a decent meal and a haircut, shopping, sex, and some quality time with his kid.

“Yo, yo if I had twenty-four hours to kick the bucket, fuck it, I’d probably eat some fried chicken and drink a Nantucket.”

Jadakiss puts on a lyrical display to be lauded on N.O.R.E.’s “Banned From TV.” The Ignatius MC trades thorough bars with fellow LOX member, Styles P about moving bricks, and running up on niggas. You don’t want these problem.

On Fat Joe’s Don Cartagena cut, Jadakiss said, “put your money on the table, we can battle on cable.” 20 years later he did and destroyed a whole crew almost single-handedly.

Jadakiss assists Lil Wayne on his Carter IV celebratory track “It’s Good,” which also features Drake. Though the track was more famous for Wayne’s jabs at Jay-Z, in which he raps “Talkin’ about baby money, I got your baby money/ Kidnap your bitch, get that how much you love your lady money,” Kiss served up another stellar cameo appearance that focused on life in the hood.

Jadakiss gets introspective on DJ Khaled‘s “Never Surrender” from the latter’s 2013 album ”Suffering From Success.” The New York rapper passionately raps about the ups and downs of street life and narrates a chilling betrayal.

DJ Khaled Feat. Mary J. Blige, Fabolous And Jadakiss “It Ain’t Over Till It’s Over”

Nas Feat. Jadakiss And Ludacris “Made You Look” Remix

“Out of shape but I make sure my gun’s healthy.” Jadakiss lets that thang talk, and reaffirms his top 5 dead or alive moniker on Nas’ Made You Look street anthem: ”I helped the game, it ain’t help me
I’m top five, dead or alive, and that’s just off one LP.” Facts!

At your lowest point is when you’re most vulnerable. Jadakiss harrowingly raps about mortality, betrayal, and other challenges that comes with being a troubled youth.

Evil thoughts in your mind keep runnin’ through
Not quite sure what you wanna do
Like, what is this world comin’ to?
Life goes on even if you don’t want it to

This is inarguably one of the most poignant verses in his discography. Run it back for all the ones we lost.

Jaheim Feat. “Every Time I Think About Her”