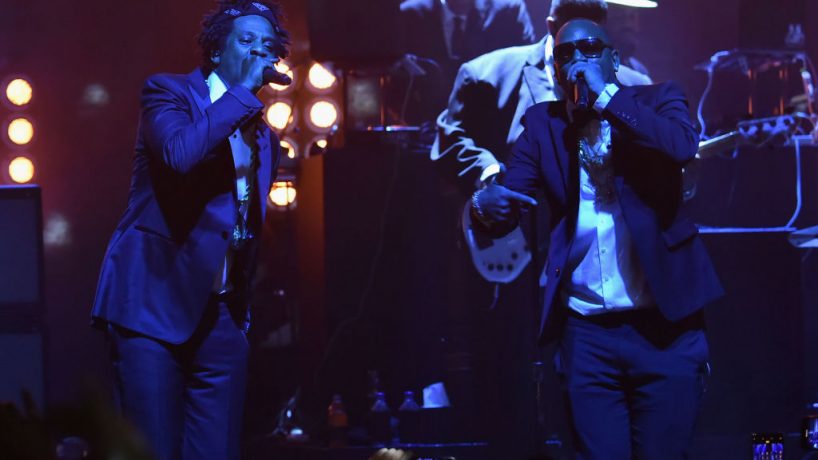 Jay-Z Vs Cam’ron: A Brief History Of Their Beef

Jay-Z and Cam’ron were at odds earlier in their careers, but initially started out as label mates. The two New York rappers were entangled in a scalding feud for over a decade, but have since reconciled. Below is a brief history of their beef.

After being turned down by numerous Record Labels, Jay-Z created Roc-A-Fella Records in 1994 with Damon Dash and Kareem “Biggs” Burke, both of whom Cam’ron and Jim Jones reportedly grew up with in Harlem.

In 1999 it was reported that Jay-Z stabbed Lance “Un” Rivera at the release party of Q-Tip’s album, Amplified at the now-closed Kit Kat nightclub in Timesquare. The incident arose over the alleged bootlegging of Jay-Z’s album Vol. 3… Life and Times of S. Carter before its release on December 28. Jay maintained his innocence early on but later plead guilty to a misdemeanor charge in October of 2001, and was sentenced to three years of probation.

Cam’ron released his second LP S.D.E. in 2000. The album included what many consider to be his first shots at Jay-Z on the song “Let Me Know” in which he raps “When the f-ck we start bouncin’?” and “you rap about money, man, who are you anyway?”

Cam’ron reunited with his childhood friend Damon Dash when he signed with Roc-A-Fella/Def Jam in 2001 after demanding to be released from his deal with Sony/Epic. The following year, he released his third album Come Home With Me, which features a cameo from Jay-Z on “Welcome To New York City.”

Later that year, Jim Jones announced Cam’ron had been named a Vice President at Roc-A-Fella. Jay-Z, who was on vacation at the time didn’t agree with the move. Cam’ron alleges this is the moment the friction between them started.

During the height of his feud with Jay-Z, Nas went on New York’s Power105 to call out Hot 97 for stopping him from hanging a wax figure of Jay-Z on stage. The Queensbridge rapper accused the famed New York station of playing favorites, while calling Jay-Z an industry sellout. During the tirade he also called Cam’ron’s Come Home With Me album wack: “I like Cam and everything, he’s a good lyricist but the album’s wack. Y’all brothers gotta start rapping about something’s that’s real.”

In response, Cam’ron dissed Nas over the instrumental of Jay-Z’s “Show You How.”

8. Cam’ron And Dipset Side With Dame

Jay-Z, Dame Dash and Biggs sell their 50% interest in Roc-A-Fella to Def Jam in 2004. Jay-Z is made President of Def Jam and thus retained control of the label and his masters, ousting his 2 former partners. Dame and Biggs felt slighted and went on to form the Dame Dash Music Group. Cam’ron and Dip Set side with their childhood homies.

Tensions had already risen by the time Jay-Z was named president of Def Jam. Cam decided to let him know how he felt about the betrayal on “You Got To Love It” wherein he accuses Jay of blocking him from being Vice President at Roc-A-Fella. He also accused him of stabbing Dame in the back. This is where the beef starts to get serious.

Cam’ron attacked Jay-Z again on Young Joc’s “It’s Going Down” remix, and “Swagger Jacker (Biter Not a Writer)” where he highlights all the songs Jay-Z has borrowed lines from.

Amidst the hype of Jay-Z’s Kingdom Come album, Jim Jones and Dame Dash decided to step things up by releasing a diss song titled, “Kingdom Done.” Jay-Z responded with “Brooklyn High,” where he goes off on how rich he is. His luxurious talk led him to coin the phrase, “Men lie, women lie, numbers don’t.”

Few weeks later, Jay-Z officially replied to Cam’ron with ingenious bars on “Dig A Hole” from his Kingdom Come LP. “N-ggas are like why don’t you get at old boy/Why kill the puppet it leaves Gapeto alive/Why not wait to catch them all together this way you dig one big hole one time,” he raps, before adding. “I ain’t forget your lil’ disrespect/No ho, daddy gon’ spank you for that shit you said.”

In a joint interview with Complex Magazine, Jones and Damon Dash indicate that their problems with Jay-Z date back to 2001, when Jay-Z allegedly bought the Kanye West-produced track “H To The Izzo” after hearing him play it in a studio session for Cam. In a 2022 interview with the Milion Dollaz Worth of Game podcast, Killa Cam discussed how the move fractured his relationship with Kanye West.

“He played this beat for me and I was like, ‘Nah, I want that.’ I wrote the song that night and did the song. I said, ‘Cool, we gon’ work the paperwork out and get this together. Two weeks later, maybe a week later, I hear, ‘H to the Izzo, V to the Izzay/ My n-gga, I used to dribble down in VA.’”

13. Jay-Z Moves On From His Feud With Cam’ron And Dame

By the time Jay-Z released “The Blueprint 3” in 2009, he was done with his past, and that included his beef with Killa, Dipset, Dame and The Game. On the album’s first cut, “What We Talkin Bout,” he puts the beef to bed saying “I ain’t talkin’ ’bout Jimmy, I ain’t talkin’ bout Dame” while stating his future endeavors.

The following year, Cam’ron stated he does not have any issues with Jay-Z anymore,

Cam’ron fired back with “Come and Talk to Me,” directly referring to the lyrics on Pound Cake, stating he was already a millionaire before he met Jay. “She said Jay made you a millionaire? and looked me in the eyes/ Said cake, cake, cake, got that from the pies/ We made each other millions, that was my reply/ had a mill before I met him, baby, that ain’t no lie/ See he named some Harlem cats and the homie from the Chi / but my thing, he ain’t name nobody from the Stuy.”

After years of quietness, Cam’ron surprisingly appeared alongside Jay-Z on stage during Jay’s B-Sides show at the re-opened Webster Hall in 2019. Cam spoke about the moment during an appearance on the Million Dollaz Worth Of Game Podcast.