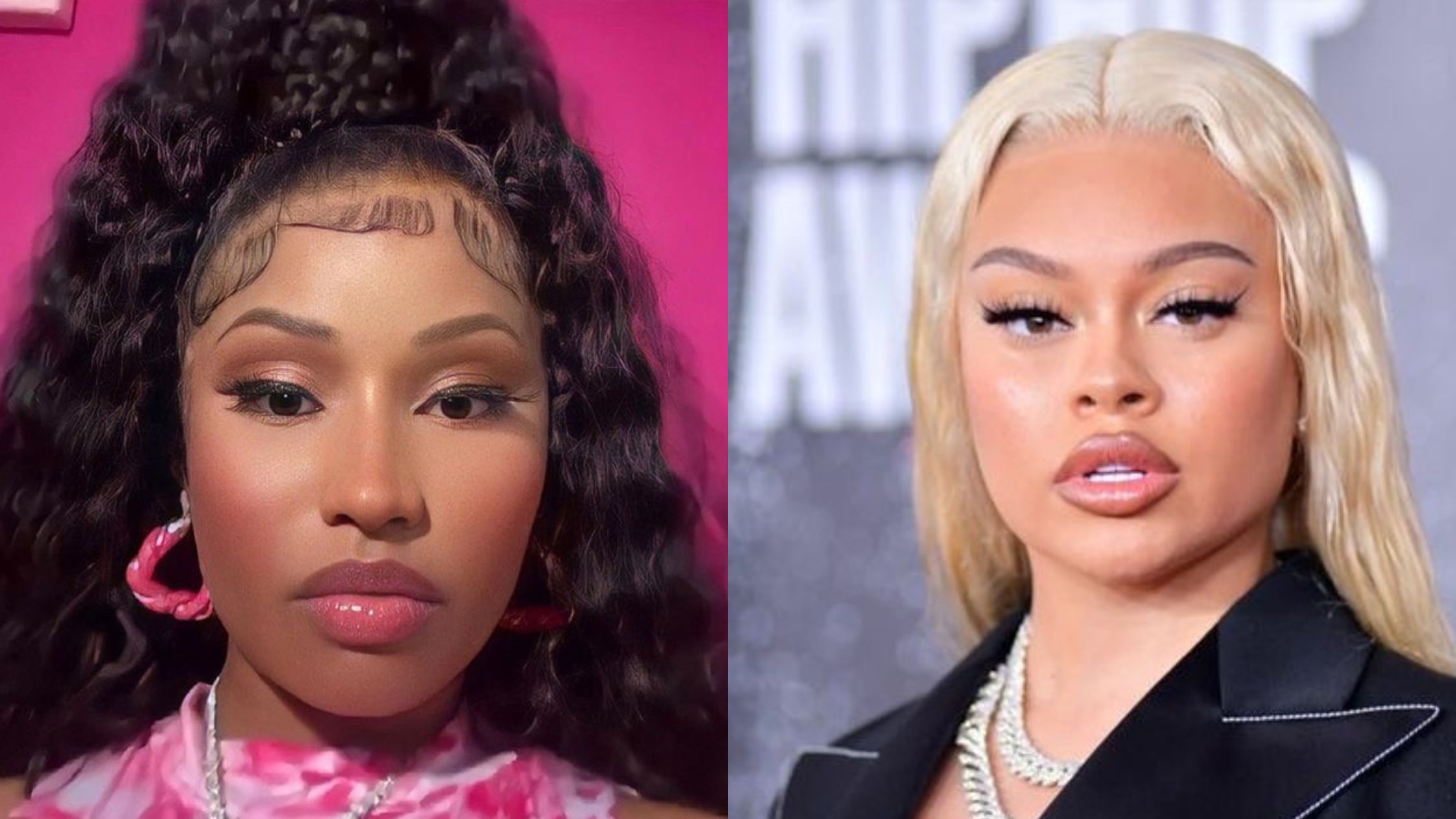 Nicki Minaj shaded Latto on social media after her hit single “Super Freaky Girl” was removed from the rap category at the 2023 Grammy Awards. Despite being submitted for rap categories, the Rick James-sampling song was reclassified as a pop record by the Recording Academy and will compete for Best Pop Solo Performance instead.

Nicki wasn’t amused by the Academy’s perceived disrespect and expressed her displeasure with the decision during an Instagram Live session on Thursday (Oct. 13).

Nicki Minaj And Cardi B Shade Each other On Twitter

“If you can’t tell by now that there is a concerted effort to give newer artists things that they really don’t deserve over people who have been deserving for many years, then you’re not paying attention. And by the way, this is not to say any song is bad or any female rapper is bad. I always say this: Any rapper, female or male, that wins a Grammy, you should be fucking proud of yourself. But why is the goalpost only ever moved when it’s Nicki? Well, I’ll tell you why. They don’t want the people that they have in the industry to go up against me.”

She continued “Super Freaky Girl,’ where I only rapped on the song, was removed out of the rap categories at the Grammys and put in pop,” Minaj told fans. “[Drake’s] ‘Hotline Bling’ won Best Rap Song and Best Rap Sung [Performance].”

“Now, let’s say that ‘Super Freaky Girl’ is a pop song,” Minaj said. “Let’s just say that. What is [Latto’s] ‘Big Energy’? … If you move ‘Super Freaky Girl’ out of rap and put it in pop, do the same thing for ‘Big Energy.’ Same producers on both songs, by the way. So let’s keep s### fair. Even when I’m rapping on a pop track, I still out-rap.”

When a fan tweeted at Nicki to point out Latto “herself has even called it pop,” the NYC rapper responded with, “Yikes.” She later shared a screenshot of a DM from an artist who said Nicki was using their name and song to prove a point.

“This Karen has probably mentioned my name in over 100 interviews,” Nicki wrote alongside the screenshot. “Says she waited in line for Pink Friday w|her Barbie chain on, bangs, pink hair…but today, scratch off decides to be silent; rather than speak up for the black woman she called her biggest inspiration.”

Soon after, Latto confirmed she sent the text to Nicki saying, “1st of all I texted u cause I didn’t wanna do the internet sht w sum1 I looked up to. Just like the 1st time I DMed u asking about ur ongoing subtweets. I wanted to speak up cuz like I said I do agree but the way u going about it seems malicious esp. after how we left off.”

She accused Nicki of subtweeting her since March and called her a bully. “I’ve ignored countless subtweets since March and instead addressed u in the dm. You’re asking why I didn’t speak up in ur defense… it’s the same answer I gave u when u asked why I didn’t congratulate you. Ur literally older than my mom tryna be a bully @NICKIMINAJ.”

Nicki quote-tweeted Latto’s post writing, “All this time I thought you was at least 35.”

Latto went on to share one of the Nicki posts she considered a subtweet and promised more to come, “I’m finna start from the beginning,” she captioned the screenshot.

Nicki, 39, dismissed the alleged subtweet, and accused Latto of being bitter because she turned down her feature request. “it was an actual person ON tiktok. A creator. Not even an artist. I’m sure the Barbz have receipts. It goes to show she made up these ‘subtweets’ in her head simply b/c she sent me 2 songs I declined to do features on. They all do this.”

She also responded to the “older than my mom” jab. “Age shaming when you look like YOU the one pushing 40. … Oh so you in your 20’s. Oh ok then. At least it match your album sales. You sold 20K right? Mad u flopped. That’s why u rlly mad.”

She also implied the Atlanta-raised rapper uses ghostwriters and said she only claims to be Black “when it’s beneficial” to her.

“Who wanna hear the reference tracks of scratch off ghost writers rapping her bars????? she used me & the Barbz in every interview until that album sold double wood now she wiping that spray tan off & being a Karen. They black when it’s beneficial.”

As Complex puts it, “The two proceeded to outline their sides of the story, with a slew of screenshots and shade. In Nicki’s “story in 5 parts,” she continued calling Latto a Karen “who blames others for her album flopping,” saying “every dm from scratch off is about a feature” and that the 777 artist “feels she has pull behind the scenes w|a few diff white men (won’t name right now).”

“U only get called old when you pass on their features i ain’t never diss my idols for not giving me a feature,” the Queen spitter wound up tweeting. “I bowed to lauryn hill feet when I met her. Feature or no feature. Should I call her old now? She a grandmother & still out rapping you.”

A story in 5 parts. Check this out y’all.

— Nicki Minaj (@NICKIMINAJ) October 14, 2022
Now pay attention. every dm from scratch off is about a feature. I was kind every time. But scratch off feels she has pull behind the scenes w|a few diff white men (won’t name right now) Now look @ my next tweet to see the very next message she sent me after I declined 3 features pic.twitter.com/MegkLa7Ht9

— Nicki Minaj (@NICKIMINAJ) October 14, 2022
Look @ how this Karen makes up a fake beef in a passive aggressive attempt to show her frustration about me politely declining 3 feature requests. Scratch off is just an entitled Karen who blames others for her album flopping. 🫵🏽 betta stop it scratch off pic.twitter.com/4RFDlLGcfP

— Nicki Minaj (@NICKIMINAJ) October 14, 2022
notice a pattern? Oh ok. U only get called old when you pass on their features i ain’t never diss my idols for not giving me a feature. I bowed to lauryn hill feet when I met her. Feature or no feature. Should I call her old now? She a grandmother & still out rapping you pic.twitter.com/v2yAYaBGuO

Then Latto shared multiple posts she claimed were subtweets from Nicki. “Ok first…This is from when I teased Big Energy Remix. You didn’t deny subtweeting me otp??? I’m confused,” she wrote. “Peep “not again” because she thinks I was “using her fans” for simply teasing my “Wheelie” ft & then the BE remix ft.”

“I literally named u as my dream collab multiple times in multiple interviews. ”like I told u otp I looked up to u…u still never answered my question about where the random shade started coming from,” she added. “With all this being said this wasn’t JUST about a Grammy category. U being funny bringing me up to defend ur case knowing our last convo didn’t end on good terms. U literally told me I’m not ‘flourishing’ and no one cares about my ‘little song.’”

Latto also quoted a fan tweet and video of when Nicki allegedly subbed her during an episode of her Queen radio.

“This lady so meticulous w her shade so she can twist it later and act like it wasn’t about you. Stand on that s###.” Latto penned. She claimed she had always shown love, but Nicki refused to say “where the random shade started coming from.”

From there, the feud intensified with Latto blasting Minaj’s marriage to alleged sexual offender, Thomas Petty.

“BEEN subbing… super freaky grandma is married AND related to f###### rapists,” Latto tweeted.” You ain’t gone bully me B####! My idol turned rival now u hating!”

In response, Nicki accused Latto of being a hypocrite, and questioned why she also worked with artists with questionable past. “1.Didn’t care about rape when she was begging for features. 2. Didn’t care about Kodak’s past 3. Didn’t care about the accusations made about Dr. Luke who produced Big Energy 4. News Flash scratch off. I’ve never raped anyone. I’ve inspired millions. You’re one of them BOZO.”