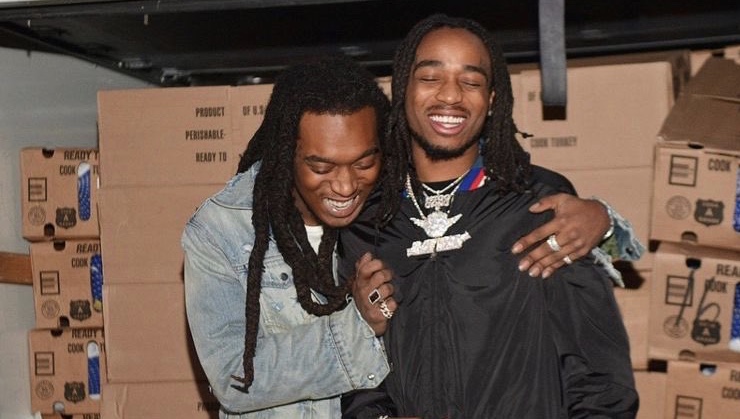 Quavo Tributes Takeoff With Emotional Song “Without You”

Quavo shares emotional song dedicated to his late nephew, Takeoff who was tragically killed during a dice game in Houston last year. On the song titled “Without You,” Quavo soberly reflects on their time together and wonders if life would ever be the same without his Unc & Phew collaborator.

“I wish I had a time machine,” he continued. “Just so you can take a ride with me/I miss how how you smile at me/Unc & Phew until infinity.”

The accompanying video uploaded to Quavo’s YouTube channel finds the Atlanta artist smoking a blunt, while sitting solemnly on a chair.

As previously covered on Rap Aesthetics, Takeoff (real name: Kirsnik Khari Ball) was shot and killed at a bowling alley in downtown Houston on November 1 2022. Police say he was an innocent bystander who was struck by bullets in the head and torso after an argument between Quavo and others broke out over a game of dice.

“I can tell you that Takeoff was not involved in playing the dice game, he was not involved in the argument that happened outside, he was not armed. He was an innocent bystander,” Sgt. Michael Burrow said at a press conference. “The event was a private party, there was a lucrative dice game that went on at the event, there was an argument that happened afterwards outside the bowling alley which led to the shooting.”

A man— Patrick Xavier Clark— was arrested in connection with the murder on Dec. 2., but was released on Wednesday (Jan. 4) after posting a $1m bond.

Around 21,000 family, friends, industry peers and fans gathered to honor the life and legacy of the late Migos rapper during his “Celebration of Life” at Atlanta’s State Farm Arena on Friday (November 11). The service officiated by Senior Pastor Jesse Curney III of New Mercies Christian Church started shortly after noon and lasted several hours featuring emotional tributes from Quavo, Offset, and Drake, plus performances from Justin Bieber, Chlöe Bailey, and Yolanda Adams.

“You are always with me and we did everything together. Since we was kids you been by my side looking up at me with them eyes same eyes you got as my sister, waiting on me to make the next move and you followed up right behind me. You always made sure I did it first so you can do it right with me,” Quavo said during his eulogy.

“You never competed with me, we was always on the same team cause you always hated playing against me because I always played too hard or too rough. Now I can hear momma saying ‘not too hard son’… remember our first dream was to be a tag team in WWE,” he added.