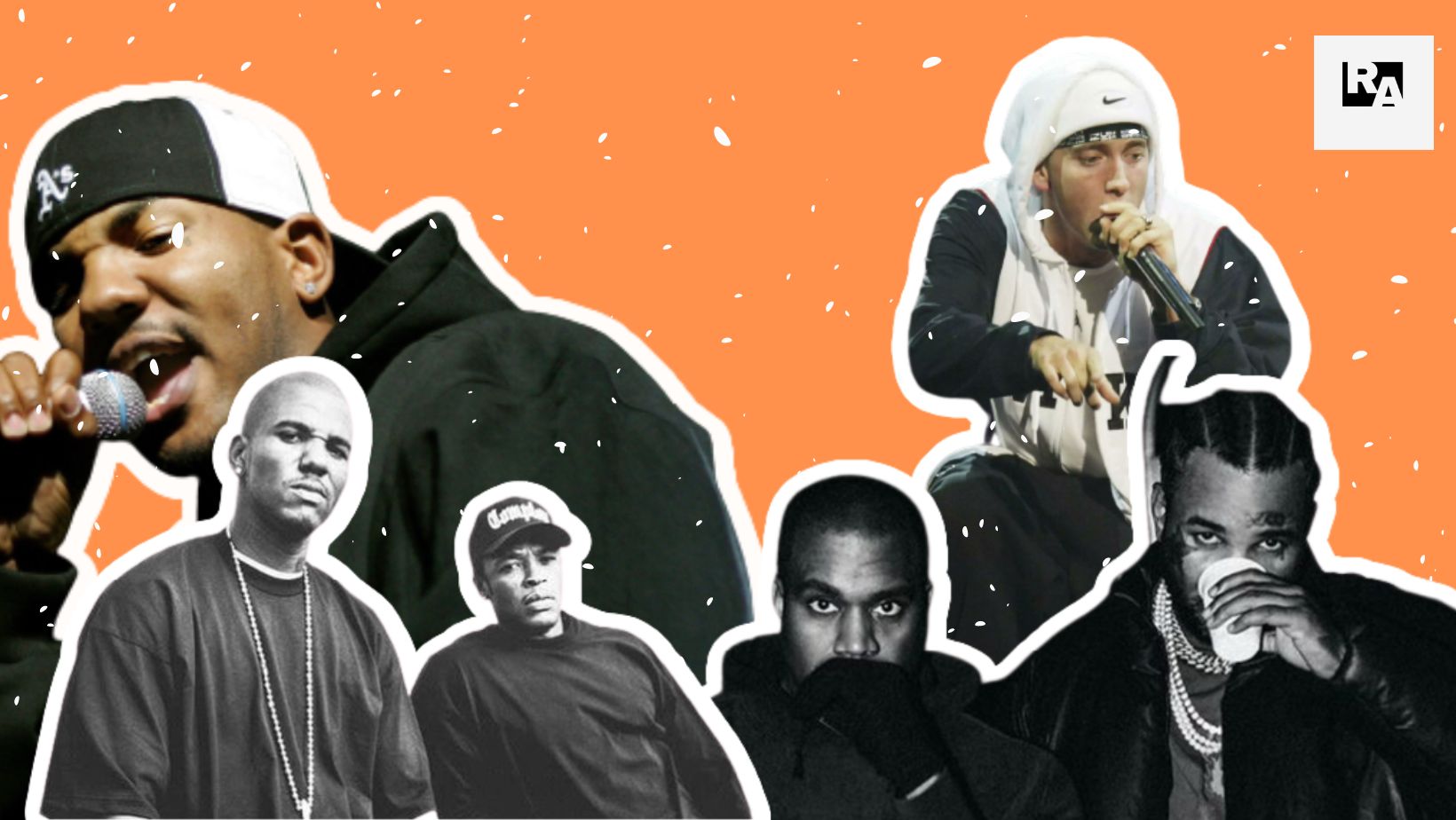 The Complete History Of The Game And Eminem’s Relationship

The Game's relationship with Dr. Dre and Eminem changed for the worst after he was left out of Dr. Dre's Super Bowl half-time show, which also included performances by Kendrick Lamar, Snoop Dogg and 50 Cent.

The Game fired rounds at Eminem, 50 Cent, Dr. Dre and Eminem’s daughter Hailie Jade on his Drillmatic cut “The Black Slim Shady.” The track generated mixed reactions from rap fans and social media users, with many wondering what reasons Game had for coming at Eminem.

Last year (May 7, 2021), the 42-year-old listed Eminem among his Top 10 rappers alive, placing the Detroit legend at number four, behind the likes of Lil Wayne, Nas and Jay-Z. He made it a point to exclude himself from the list, adding he’ll “go bar for bar with anybody on the list”.

Though it’s not exactly clear what caused the switch up in his affinity for Eminem, there’s an evident timeline of events that led to this moment. Below we revisit the history of The Game’s obsession with Eminem.

This may seem trifling but The Game’s beef with Eminem, and by extension Dre allegedly started after he was left out of Dr. Dre’s Pepsi Super Bowl LVI Halftime Show on February 13 at the SoFi stadium. The performance featured some names affiliated with Dr. Dre including Snoop Dogg, Eminem, 50 Cent, Kendrick Lamar and Anderson .Paak.

Dr. Dre signed The Game to his label Aftermath Entertainment in 2003 and he went on to co-produce his classic 2004 debut ‘The Documentary’. Game was also a presence in the West Coast scene in the early 2000s, and believes he should have been included in the celebration of the city’s rap culture.

The surprise cameo from his arch-rival, 50 Cent left a bitter taste in his mouth and the rapper was feeling visibly salty. He expressed his disappointment with the omission by reposting a few Instagram Stories to his account.

After sharing a few videos from his Super Bowl LVI party, The Game reposted another IG Story, this time from @sincereshow. “[The Game] should have performed at [the] Super Bowl with @DrDre. I mean, this is LA.”

During an episode of the I Am Athlete podcast with Brandon Marshall, Pacman Jones and Nick “ Swaggy P” Young. The Game admits he was “hurt” about being excluded from the Super Bowl LVI Halftime Show.

“The real reason I wasn’t on the Super Bowl [Halftime Show] is because I’m not a ‘safe’ artist,’” he explained. “You don’t know what the Game gon’ do when he get up there. So, it’s just like, ‘He not safe,’ so they went with the safe artists.”

Game adds the show was an opportunity to celebrate LA hip hop, and believes he should’ve been involved in the festivities along with Compton native YG.

“We, on the West Coast, are the only motherfuckers who have this crab-in-a-barrel mentality, where we wanna keep n***as down …” he explained. “Snoop Dogg is icon. Dre is icon. Em is an icon, but Em is not from L.A. 50 is not from L.A. I’m not taking away from the fact that they’re were on the Super Bowl, but L.A. [artists] wouldn’t have been in the Detroit Super Bowl or New York Super Bowl. It just wouldn’t have happened … L.A., L.A., L.A. all around the Super Bowl and I didn’t get the call.”

March 3, 2022: The Game says Kanye West has done more for his career than Dr. Dre ever has

In March 2022, The Game appeared on Drink Champs with N.O.R.E. and DJ EFN. On it, he claimed that Kanye West has done more for his career recently than Dr. Dre ever did. The comments followed his duet with Ye on the song “Eazy.”

“It’s crazy that Ye did more for me in the last two weeks, than Dre did for me my whole career,” he said.

In an interview with Drink Champs, the Compton rapper proclaimed himself better than Eminem, and added he would happily go up against him in a VERZUZ battle to prove it.

“I used to think Eminem was better than me,” he admitted. Game was then asked how he feels now, to which he replied: “He not. He not. He’s not. Challenge it.”

He reinforced his belief that he’s the superior rapper in a different interview with All The Smoke, while suggesting that Eminem isn’t played in public.

March 6, 2022: The Game doubles down on claims that he’s better than Eminem

Despite the social media backlash that followed his comments on Drink Champs, The Game didn’t back down. In an Instagram video shared on Sunday (March 6), The Hate It Or Love It rapper doubled down on his claims about being better than Slim Shady.

The Game questions why he’d admit another human is better than him at anything, while also using the moment to exaggerate his abilities.

“I also gave [Eminem] his props in the same accord. As far as being better than me, nah. Eminem is not better than me. Bro, I’m better than him. I said it again and I’ll keep saying it again, bro. It is what it is. Bro, you can take it, run and go tell him, do whatever you want ’cause when it’s time to get down and it’s time to grab that mic and stand in front of that microphone and that booth, I’m gone air muthafuckas out every time, bro.”

On Tuesday (March 8), Eminem became the most certified artist in RIAA History with 73.5 million new certifications. He’s also only one of seven artists in any genre or era with three or more Diamond Album Awards.

The Game reacted to Eminem’s new RIAA certification by calling the Detroit rapper a puppet, while attributing his success to his white skin.

“All this talk I see on the net saying Eminem is better than me because he sold more records is like saying McDonald’s is better than Tam’s burgers, it’s FALSE !!! They just put more money in McDonald’s & promoted the shit out the happy meal dangling toys in kids faces.”

“They only want you to believe in yourself to a certain extent. Soon as you start telling yourself you’re better than their CHOSEN ONE or challenge the machine, they start feeding the internet STATS like I give a fuck how many records the next man sold.”

He reiterates he doesn’t care about records sold, and issues out a challenge to Eminem and “any rapper” that dares to think of challenging him.

“F-ck how many records he sold, you sold or I sold. that’s just #’s on paper n some little awards that ain’t no bigger than my YMCA trophy’s.

I don’t give a f-ck what songs Eddie Kane use to be able to sing. Get the f-ck in that booth in REAL TIME… TODAY & LET’S FUCKIN’ RAP !!!”

By this time it became obvious Los Angeles Confidential was using Eminem’s name to generate buzz for his 10th album ‘Drillmatic – Mind Vs. Heart’.

The Game’s constant attack of Eminem culminated with the release of “The Black Slim Shady.” A supposed diss song that pieces together everything he likes and hates about the Detroit legend. As mentioned above, he attacks Eminem’s personality, his daughter and relationship with Dre.

Eminem is yet to respond to any of The Game’s antics.