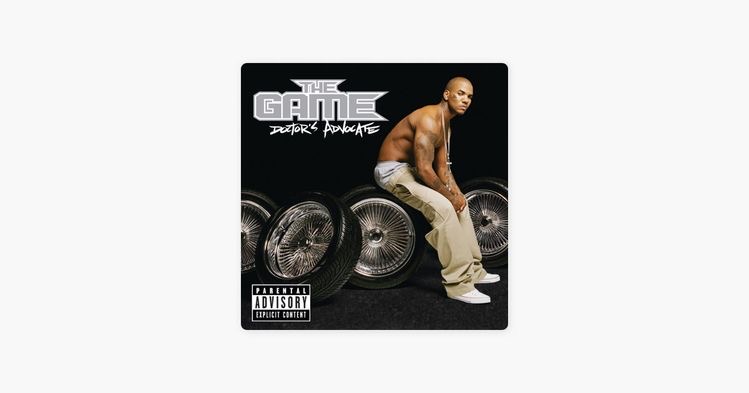 Before he became known as an attention seeker, believe it or not, The Game used to be more famous for his rapping talents back in the day. He released his critically acclaimed debut album “The Documentary” in 2005 and was projected to be at the forefront of the West Coast hip hop renaissance.

The Game, born Jayceon Terrell Taylor was placed into G-Unit by Dr. Dre, who signed him to his Aftermath Records label imprint in 2004.. Even then you could tell he was unhinged and was going to be difficult to work with. The game was mainstream but he never left the streets. His brash behavior and overbearing demeanor eventually led to him being axed from G-Unit.

Since then he has been at loggerheads with 50 Cent. The exit also affected his relationship with Eminem and Dre but his love for them never wavered. His 2006 sophomore album “Doctor’s Advocate” was released as an ode to Dre, though the 2001 rapper did not contribute any production to the album.

“Doctors Advocate” became Game’s second studio album to debut at number one on the U.S. Billboard 200 chart, selling over 360,000 copies in its first week. The album featured production by Kanye West, Scott Storch, Swizz Beatz, Just Blaze, and many more.

He went on to release more than a handful of decent song albums and mixtapes throughout his career, proving that he could still make good music without the help from Dr. Dre or 50 Cent.

On Friday, Aug. 12 The Game released his tenth studio album Drillmatic – Mind vs. Heart. The album performed poorly on the charts and was widely criticized for its chaotic rollout. Despite having a star-studded line, Drillmatic debuted outside of the top ten on the US Billboard 200. We revisit the West Coast rapper’s previous nine albums to see how they performed on the charts.

Born 2 Rap was released as the final album of The Game’s career. It arrived on November 29, 2019, via Entertainment One. With features from the likes of Ed Sheeran, 21 Savage, Chris Brown, Marsha Ambrosius, Nipsey Hussle, and Trey Songz, “Born 2 Rap” opened at No. 19 on the charts selling 23,000 digital units in its opening week. Though the numbers were disappointing, Born 2 Rap received an average rating of 82 on Metacritic.

Drillmatic served as the 11th album of The Game’s career, and 10th majorly. The album’s release was overshadowed by his supposed Eminem diss track, The Black Slim Shady, a 10-minute track that found the West Coast rapper taking shots at everything Eminem related including his relationship with Dr. Dre and his daughter. The diss track affected the album negatively which resulted in an abysmal showing on the chart. Despite being saddled with 30-tracks and features from the likes of Pusha T, Lil Wayne, Big Sean, Chris Brown, Kanye West, and many more, Drillmatic – Heart Vs Mind, which Game proclaimed in interviews was going to be the album of the year opened at No. 12 on the charts after selling just 25k copies in its first week.

Two months after releasing his previous double album The Documentary 2 and The Documentary 2.5 respectively, the Game took to Instagram to announce his next project “1992” would be released without any features. When the album finally arrived on October 14, 2016, it included two guest appearances by R&B singers Jeremih and Jason Derulo, as well as uncredited appearances by Osbe Chill, Lorine Chia, and Sonyae Elise.

“1992” debuted at No. 4 on the US Billboard 200 with 32,000 album-equivalent units, which included 25,000 pure album sales, marking The Game’s ninth top-ten album of his career. The album received positive reviews from most critics and was praised for offering social commentary on real-world issues.

The “Documentary 2.5” served as the second half of his Documentary 2 album. The album arrived on October 16, 2015, with features from will.i.am, Schoolboy Q, Jay Rock, Nas, DJ Quik, Busta Rhymes, and Problem, among others. The project didn’t quite live up to the commercial expectations, debuting at no. 6 on the US Billboard 200, with first-week sales of 48,000 album-equivalent units, which included 42,000 pure album sales.

“Jesus Piece” served as The Game’s sixth album, and last under Interscope. The album was Game’s first album since the multi-platinum selling and critically acclaimed The Documentary to feature production from Dr. Dre. Upon release, the album received generally positive reviews, with most critics praising the production and guests on the album. “Jesus Piece” debuted at number six on the Billboard 200 with first-week sales of 86,000 copies.

“The Documentary 2” was released as the sequel to The Game’s 2005 debut album, The Documentary. Serving as his seventh studio album overall, “The Documentary 2” received rave reviews from critics on its way to debuting at no. 2 on the US Billboard 200, with first-week sales of 95,000 album-equivalent units, which included 85,000 pure album sales.

The Game’s fourth studio album, The R.E.D. album was released after almost two years of delay. Featuring songs like “Pot Of Gold,” ”The City” and the controversial “Red Nation,” the project debuted at number one on the US Billboard 200, selling 98,000 copies in its first week. Despite the positive response from fans and critics, Game wasn’t impressed with the album, and considered it one of the worst of his career at the time. “If I had a choice, I would say fuck L.A.X. and R.E.D. because I was kind of lost in trying to re-find the love for hip-hop,” he said.

The rapper’s fourth studio album debuted at number 2 on the United States Billboard 200, selling 238,000 copies in its first week. LAX missed out on the top spot after selling 1,134 less than Slipknot’s All Hope Is Gone, which debuted at number one with first-week sales of 239,516 copies.

The Game followed his impressive debut album with Doctor’s Advocate, his sophomore album. The project’s title was an obvious nod to his affiliations with Dr. Dre who signed him to his Aftermath Entertainment label in 2003. The album was released on November 14, 2006, via Geffen Records after Game terminated his contract with Aftermath/G-Unit due to his feud with 50 Cent. With Doctor’s Advocate, the Compton rapper needed to prove his first album wasn’t a fluke and that he could still make good music without the input of Dr. Dre and 50 Cent. The publicity surrounding his fallout with 50 Cent seemed to have worked in his favor as Doctor’s Advocate debuted atop the Billboard 200, selling over 360,000 copies in its first week, making it Game’s 2nd No. 1 album in a row.

The Game’s critically acclaimed major debut album “The Documentary” arrived on January 18, 2005. This would be the Game’s only album on Aftermath and G-Unit Records, as he left the label later in 2006 after a feud began between him and fellow G-Unit label-mate 50 Cent. With hits like “Hate It Or Love It,” “Dreams,” “Put You On The Game” and more, The Documentary was an international success with most critics giving it four stars. The album went on to debut at number one on the US Billboard 200, selling 586,000 units in its first week. In March 2005, the Recording Industry Association of America certified the album double Platinum, and by November 2005 the album sold 2.5 million copies in the U.S.

“The Documentary” remains the Game’s best-selling album to date.