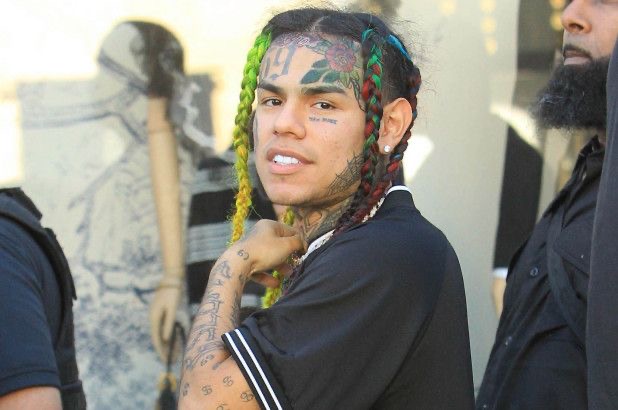 Tekashi 6ix9ine was reportedly jumped while clubbing in Dubai this week. According to multiple reports, the Brooklyn rapper was beaten by a mob after he swung at a Dubai DJ who refused to play his music.

Hollywood Unlocked reports the self-proclaimed ‘King of New York’ approached the DJ at Dubai’s Soho Palm club and requested for one of his songs to be played. The DJ allegedly turned down his request, which was when 6ix9ine allegedly attacked him.

6ix9ine Responds To Fat Joe Calling Him A “Pussy”

Footages making the rounds on social media shows the controversial New York rapper being rough-handled by “a lot of lads” who reportedly “jumped him baddddd” for attempting to hit the DJ. A source informed HU that the DJ hopped back on the mic and “screamed, ‘We don’t like snitches. No way am I playing a snitch’s song.”

6ix9ine also reportedly had his chain snatched during the melee, but he was quick to debunk the allegations by sharing a video showcasing his complete set of jewelry and a large amount of cash in both US dollars and another currency.

Turns out the ‘FeFe’ rapper was being political with the truth as a recently surfaced video clearly shows the moment his chain was snatched from his neck.

6ix9ine is currently in Russia for his headlining show at Banger Fest, which takes place on Sunday.