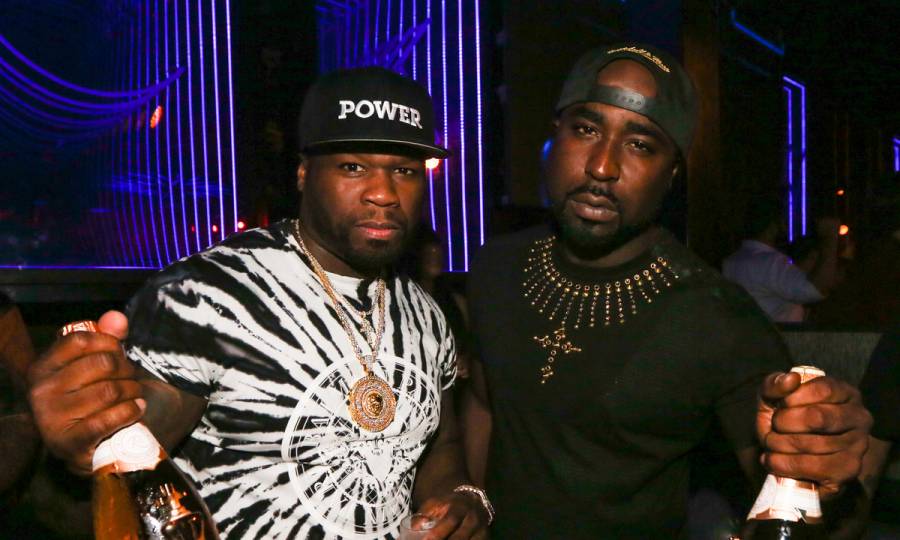 50 Cent hits back at Young Buck after the former G-Unit rapper claimed he forced him into bankruptcy.

Buck made the assertion while on the “It’s Tricky with Raquel Harper” podcast on Tuesday (April 12).

“My biggest situation was the fact that he sent cease and desist out to try and stop all of my music and get everything pulled down, saying that I’m still an artist under G-Unit,” Buck explained. “And that right there lead me to realize that I have to try to find a different route to be able to complete this one album that I have left with him to be free and done.”

“I included what he claimed that I owed him in the bankruptcy to be able to say, ‘Well hey, if you’re owed this and present whatever receipts or whatever… You will be paid type of situation.’ But that was the only way I was able to go forward with working.”

Less than 24-hours after the interview became public, 50 Cent pettily responded with a two-for-one combo Instagram post that suggested both Buck and Benzino were gay.

“Young Buck, Benzino just embrace who you are but don’t pat nobody butt when they score a basket fool,” he wrote. “LOL Hahaha, Nah. FOR REAL! PUNK!”

The caption is accompanied by an old video which includes a recording of Benzino talking about his sexual preferences.

YB wasn’t mentioned or featured in the video, which makes you wonder if 50 Cent just needed a reason to come after the “Love & HipHop” star. In another Instagram post, the New York rap legend shared more audio from the Benzino commentary alongside a video of a trans woman.

“You don’t fucking look bad, I do,” Benz says in the clip. “You can never look bad. In this world, you ain’t doing nothing wrong. It would be wrong if I did. Can’t you get that through your head? You’re not looking bad Shawna. You’re looking like a fucking chick. hey it’s just a chick trying to fuck with a n-gga. I’m looking wrong ’cause what the fuck are you trying to do fuck with a transgender?”

50 Cent adds in the caption, “LOL OH MY GOD, THIS GUY IS CRAZY @iambenzino.”

Young Buck addressed unfounded rumors of his sexuality during his time on the “It’s Tricky with Raquel Harper” podcast. “I have nothing against anybody and what they choose to do. Me, I love women, I love p-ssy,” he said.

Young Buck’s gay rumors stems from a 2018 viral video posted by a hacked account claiming to show the former G-Unit member involved in a sexual act with a transgender woman. The Nashville native was forced to deny the allegations saying, “ain’t shit gay about me.”

“Let me address this real fast real quick,” he said on Instagram at the time. “Ain’t shit gay about me. I ain’t got a problem with no gay people. Whatever the fuck you n-ggas thought you seen on a tape, n-gga that ain’t no muthafuckin’ tape of no muthafuckin’ punk sucking my dick.”

However, the rumors didn’t stop, with 50 Cent being the number one peddler. In an audio clip, Young Buck is heard begging the woman behind the stunt, Glamour Purfek, to take the video down.

“Take this shit down and stop this,” he said. “You talking to me only. There’s nobody else on this phone. Please don’t have me recorded. I don’t know what type of games. Can you take this down and issue some type of retraction statement – because it’s getting people hurt. People are about to get hurt outside. It’s bigger than you – if you can please just take this down and issue a retraction statement because it’s going to kill a lot of shit. People are getting hurt. Bullets are flying at this point.”

In a previous interview with DJ Vlad, Buck denied the accusations, but however admitted he was once catfished.

“When that shit first happened, man, just to be honest with you, it fucked me up like it would fuck anybody up,” Buck said. “For me, it was one of them situations where I reacted not even seeing the video first because I know where I stand at. Like I said, I don’t got a problem with them people. That wasn’t me. But when I seen the fucking video, I said, ‘Damn, that is me in that fucking video.’

He continued, “Me, at the time, thinking with my dick, I smashed over there thinking I’m gonna smash on this bitch and walk in the situation — it wasn’t even me knowing what the person was at the time, it was me feeling like, hold on, this is a fucking robbery or set-up because when I realized, ‘Hold on, that ain’t the same muthafucka that’s been in the video,’ I immediately got the fuck out of the room.”

Buck insisted he was set up but wasn’t sure why he was targeted. He claimed he went there looking for oral sex from the woman he’d been talking to in his DMs.

“It’s clearly a situation where they were using [the video] to try and set me up for whatever reason or whatever they was trying to do,” he continued. “Because when I seen this shit, I could see the way the camera angles were set up, but there was nothing that came from that. It was me getting out of the room honestly thinking that it was a fucking set-up from a bitch because nothing came from it.

“I approached the situation like, ‘Ay, put this muthafucka in your mouth’ from the understanding of what it was through these DMs and texts at that time was, ‘I’m on my period.’ So I was basically coming in, looking for the goddamn head out the bitch, but it ended up not being a fucking bitch and I ended up not getting no head from this muthafucka.”

Glamour Purfek eventually apologized to Buck and his family, before explaining that her account was hacked. “First, I would like to start by apologizing to David [Buck], his family, friends, anyone who has been offended or hurt by the video that was recently posted upon my page. Unfortunately, I haven’t had access to my page for over a week.”