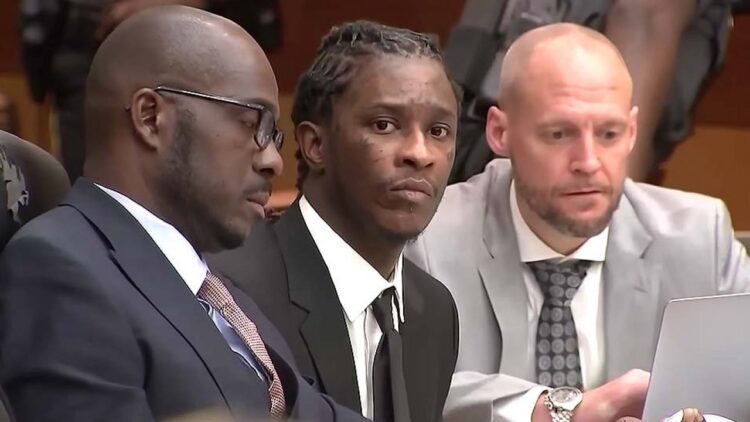 Young Thug and YSL’s RICO trial is currently underway and is expected to last nearly a year. During Wednesday’s Jury selection, Young Thug and his co-defendant Kahlieff Adams were caught by surveillance cameras conducting a “hand-to-hand” drug deal.

According to a tweet by WSBTV’s Michael Seiden, Prosecutors say the surveillance shows Adams walk over to where Young Thug is seated at counsel table with his attorney and then drop what was later determined to be a Percocet pill in his hand. A deputy confronts Young Thug who immediately turns over the pill to authorities.

In a follow-up tweet, Seiden says deputies searched Adams, and found him in possession of Percocet, marijuana and tobacco wrapped in plastic and food seasonings to conceal the odor. In an effort to hide his crimes from the court, investigators say Adams, who is currently serving a life-without-parole sentence for murder ingested other items of contraband and was taken to Grady Hospital.

Following these events, WSBTV reports Prosecutors filed a motion, asking the court to “make a finding of fact that Court was delayed on January 18, 2023 because of the actions of Defendant Williams and Defendant Adams.”

One of Young Thug’s attorneys, Keith Adams says his client had nothing to do with the alleged drug transaction in court.

“Mr Williams had nothing to do with what went on in the courtroom yesterday. One of the co-defendants on his way to the restroom attempted to pass something to Mr. Williams [Young Thug] who immediately turned it over to the deputy. We don’t know what it is, he turned it right over to the deputy right away. The deputies took action. The individual who had the contraband and not Mr. Williams was taken to the back where I’m told he ingested whatever he had, and had to be taken to the hospital, and as a result the court was terminated for the rest of the day.”

The Fulton County District Attorney’s Office says any charging decision for the incident will be made after a full investigation.

“On behalf of Mr. Adams, these allegations are simply that: mere statements made by the state in an effort to thwart the lengthiness of the jury selection process,” an attorney representing Kahlieff Adams tells Channel 2’s investigative reporter Mark Winnie. “Mr. Adams adamantly maintains his innocence and looks forward to the conclusion of this trial.”

Young Thug, whose real name is Jeffery Williams, was charged along with 28 Young Stoner Life (YSL) affiliates last May for conspiracy to violate the Racketeer Influenced and Corrupt Organizations Act (RICO) and participation in criminal street gang activity.

In addition to specific charges, Wsbtv reports the August indictment includes a wide-ranging list of 191 acts that prosecutors say were committed between 2013 and 2022 as part of the alleged RICO conspiracy to further the gang’s interests, including an allegation that Young Thug threatened in July 2015 to shoot a security guard who was trying to get him to leave an Atlanta-area mall.

Specific lyrics from the rapper’s music is expected to be used as evidence against him.