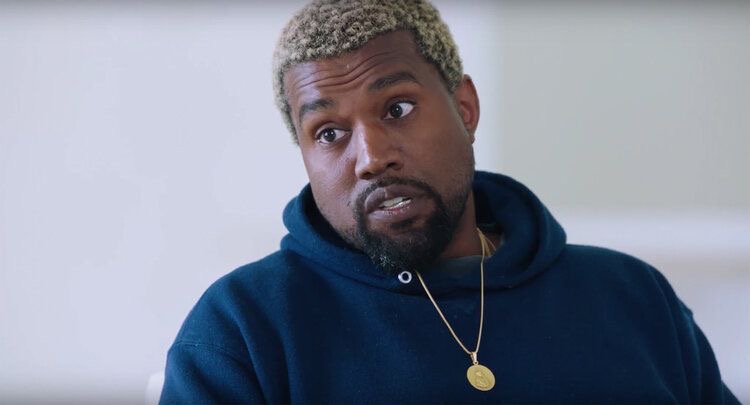 Kanye West’s second appearance on Drink Champs was an eventful one. The 45-year-old bipolar rapper created a storm with some of his comments, while addressing his recent drama with Adidas, Chase Bank, and the ‘White Lives Matter’ T-Shirt he wore during his Paris Fashion Show.

In addition to accusing Meek Mill and Diddy of working with the feds, he also claimed George Floyd’s death was actually caused by his alleged usage of fentanyl because Derek Chauvin’s knee wasn’t “on his neck like that.”

He continued “One of the things that his two roommates said was ‘They want a tall guy like me.’ And the day when he died he said a prayer for 8 minutes… they hit him with the fentanyl. If you look, the guy’s knee wasn’t even on his neck like that.”

George Floyd did have a small amount of fentanyl in his system when he was murdered in May 2020 by Minneapolis police officer Derek Chauvin.  However, both the coroner and medical experts concluded that his death was from Chauvin’s knee cutting off his oxygen supply. Chauvin was later convicted of Floyd’s murder and sentenced to 22 years in prison.

Ye’s comments, as you’d expect attracted backlash from the public, including Floyd’s family who are now reportedly considering filing a lawsuit against the Donda rapper. The Family’s lawyer Lee Merritt tweeted on Sunday (October 16) that George Floyd’s family could sue West for slander.

“While one cannot defame the dead, the family of #GeorgeFloyd is considering suit for Kanye’s false statements about the manner of his death. Claiming Floyd died from fentanyl not the brutality established criminally and civilly undermines & diminishes the Floyd family’s fight,” he typed.

Another user wrote: “N.O.R.E is super irresponsible to allow Kanye yet another platform to basically lie and say George Floyd wasn’t murdered. Also allowing Candace Owens plugs too? And allowing this after the WLM shirts and anti-Semitic rants. Disgusting.”

The former rapper, turn podcast host reacted to the negative remarks by sharing an extended clip of the interview on Drink Champs YouTube channel, where he questioned the disgraced rapper about his recent “White Lives Matter” stance.

“But when you wear the White Lives Matter shirt, it kinda takes away from everything from Black people,” N.O.R.E told Kanye West. “Because what it is is the same way you wear the confederate flag, and we’re like, ‘Damn.’ And I know you. I love you. I f-ck with you, you my brother. So I take this. And I’m a real n-gga. And I’m a real n-gga in the streets every day. But, even me, I question, like, why would you try to… Like, even when you said, George Floyd […] ‘I can prove that somebody wasn’t on his neck.’ We don’t even care about that, Ye.”

“We Black people, we black panthers…we f-ck with you when you say it’s time to f-ck with you,” N.O.R.E. continued. “We want to continue to follow you, you’re Ye. We know White lives matters, we know that, But Black lives matter when we get killed every single f-ckin’ day. We have to notice that.”

He also shared another video revealing the last three days have given him pause for thought. “I’m starting to realize free speech ain’t free,” he claimed. “Some people got to pay for free speech. Im just not one that’s willing to do it.”