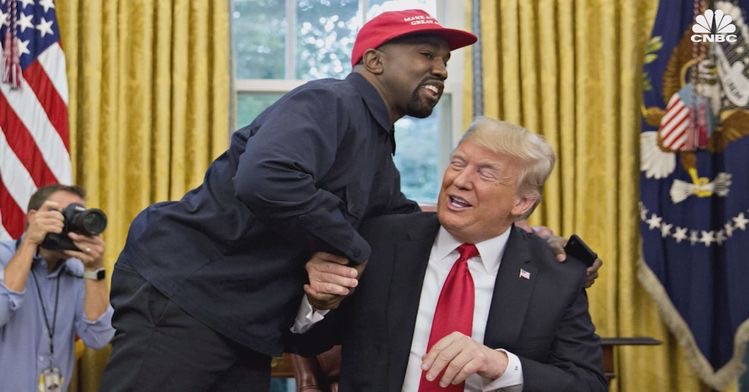 Kanye West is back to sharing his thoughts on Twitter after his account was reinstated this week by the app’s new owner Elon Musk.

In one of his comeback tweets, the former Yeezy billionaire revealed he asked former US president Donald Trump to be his running mate in the 2024 US elections.

“First time at Mar-a-Lago,” Kanye wrote Wednesday, suggesting he met Donald Trump at his Miami estate. He continued noting there was “Rain and traffic,” before embarrassingly saying, “Can’t believe I kept President Trump waiting. And I had on jeans, Yikes.”

He goes on to reveal he asked Trump to be his running mate for the forthcoming presidential elections. “What you guys think his response was when I asked him to be my running mate in 2024? He wrote along with an embedded Twitter poll with the options “That’s very Ye,” and “That’s very Nay.”

It seems Kanye hasn’t been watching the news because Trump already declared his own intentions to run for president in the 2024 election. There’s no chance he steps down for a polarizing rapper with no political experience.

Last week the artist now known as Ye announced his intention to run for the office of the President of the United States in 2024. He also revealed controversial alt-right commentator Milo Yiannopoulo is set to work on his campaign.

“This is Milo right here, working on the campaign,” Kanye said in the clip below.

“I guess it is,” Milo replied before adding, “Thanks, I accept.”

The cameraman then asked Kanye, “So you are running?” to which he responded, “Yes.”

“It’s simple because nobody can tell me you should say this or you shouldn’t say that,” the Grammy winner went on.

“It’s just that we’re moving towards the future,” he added.

The former editor of Breitbart has been criticized for his stances on Islam, feminism, and the LGBTQ+ community, and making him part of your campaign is a careless statement from Kanye.

In a conversation with celebrity gossip outlet X17, the 45-year old fashion designer/producer explained he decided to re-run for president of the United States after adidas allegedly froze four of his bank accounts over his antisemitic comments.

“The reason why I’m announcing that I’m running for president is I want the FCC to look at my money,” Ye said. “If they actually see, I was looking at my money, and there might have been a possibility that adidas wouldn’t have went into JP Morgan and froze my account and put a $75 million hold on four different accounts.”

He explained that as president he could change the laws and prevent Americans from suffering similar faith.

Kanye West campaigned as an independent candidate in 2020 against Donald Trump and Joe Biden, who won the US presidential election.