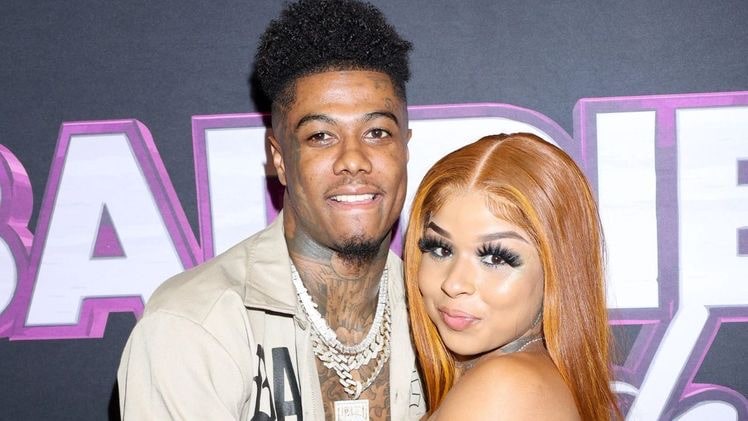 Blueface says he’s officially done with whatever relationship he has going on with Chrisean Rock. While the two never outrightly confirmed their relationship, Chrisean Rock and Blueface have been of public interest since her time on the Thotiana rapper’s reality show Blue Girls Club.

Their off-and-on relationship have been riddled with nasty social media spats, arrests and even fist fights that often involve other family members. Chrisean and Blueface have been guilty of getting into physical altercations with members of their families. Rock beat up Blueface’s mom in the past, and Blueface hit Chrisean Rock’s dad. The rapper recently addressed the fights and blamed the unruly behavior on Chrisean, who he says keeps instigating him against his family.

“Food for thought: rock didn’t fight or attempt to fight anyone in her family for me her explanation“i don’t agree with fighting my family” but volunteer me to fight mine when put in the same uncomfortable position that’s crazy work stand on yo principles or be held accountable,” he tweeted on Wednesday (January 18).

“It’s no beef my only point is don’t volunteer me to do some you wouldn’t volunteer yourself to do the truth could never be disrespect,” he continued. “If we pull up to a bank an you say hey you should go in there an rob it so I rob the bank successfully we pull up to da next bank an I say Ight it’s your turn an you say Im against robbing that’s a red flag I’m getting out the car.”

Chrisean Rock recently had a meltdown on No Jumper podcast and had to be carried out. In a viral clip that surfaced online, the former D1 athlete can be heard yelling for Blueface and kicking things in the studio.

Blue addressed her belligerence on Twitter and accused Rock of lacking accountability. “Alcohol isn’t her problem her mentality is her problem all you people on here making excuses for a lack of self control an irrational behavior is contributing to the problem,” he tweeted.

“When she displays this type of irrational behavior on baddies or blue girls club you guys applaud an cheer but when it’s a different setting an it doesn’t look as good you guys want it to be everybody else fault this is how she carry herself with or without me,” he added.

Moments later, January 20, Chrisean Rock attempted to salvage their relationship by announcing she’s pregnant with Blueface’s baby. Despite claiming in interviews that she isn’t going to bring a baby to this world until she’s married, Rock says she plans on keeping this one.

“Im just having this child because I don’t want to keep aborting.”

Blue, who signed Chrisean Rock to his Blueface LLC label back in 2020 took to twitter to announce he’s breaking up with Chrisean. He also accused the ‘Lonely’ artist of having multiple sex partners during the time they were together.

“To answer y’all questions yes me an rock are officially done it’s strictly business I tried it an clearly it wasn’t giving before she announces…she’s pregnant with somebody else’s child not mine,” he tweeted. “Rock has had encounters with 10 different men in the last year until I see DNA test then it’s not mine. I know I know y’all thought she was all about me…me too lol but the facts are facts being my BM would be a blessing.”

He also attributed her pregnancy claims to her being high off the Henny. “She must be currently drinking while pregnant that’s a red flag.”

“It’s not a Blueface baby,” he added. Later writing “Lord Please [prayer Emoji]. In the name of Jesus.”

Rock denied the allegations, tweeting back: “I haven’t sexually been active with no one but u n plus there’s can a DNA test… n ion need yo money I got my own I don’t need a baby Daddy I’m just having this child because I don’t want to keep aborting.”

She continued, “Promise you. I don’t need a cent from u . Then wen we do a DNA test and it’s yours just know I’ll tell my children you died so u wouldn’t have  a exuse to be in the child life. This my baby n dats dat.”

She also confirmed the two are no longer together, while claiming she found out about the pregnancy after their breakup.

“We broke up befor knowing I was pregnant. I still ain’t do nothing sexually with any dude. I’ll be a dumbass if I didn’t know for certain.”

This isn’t the first time the toxic couple are airing their private business in public. For all we know this could be more publicity stunt for their Zeus reality show Crazy In Love. You can read more about Chrisean and Blueface here, including shocking details about her childhood.

See some of their tweets below.