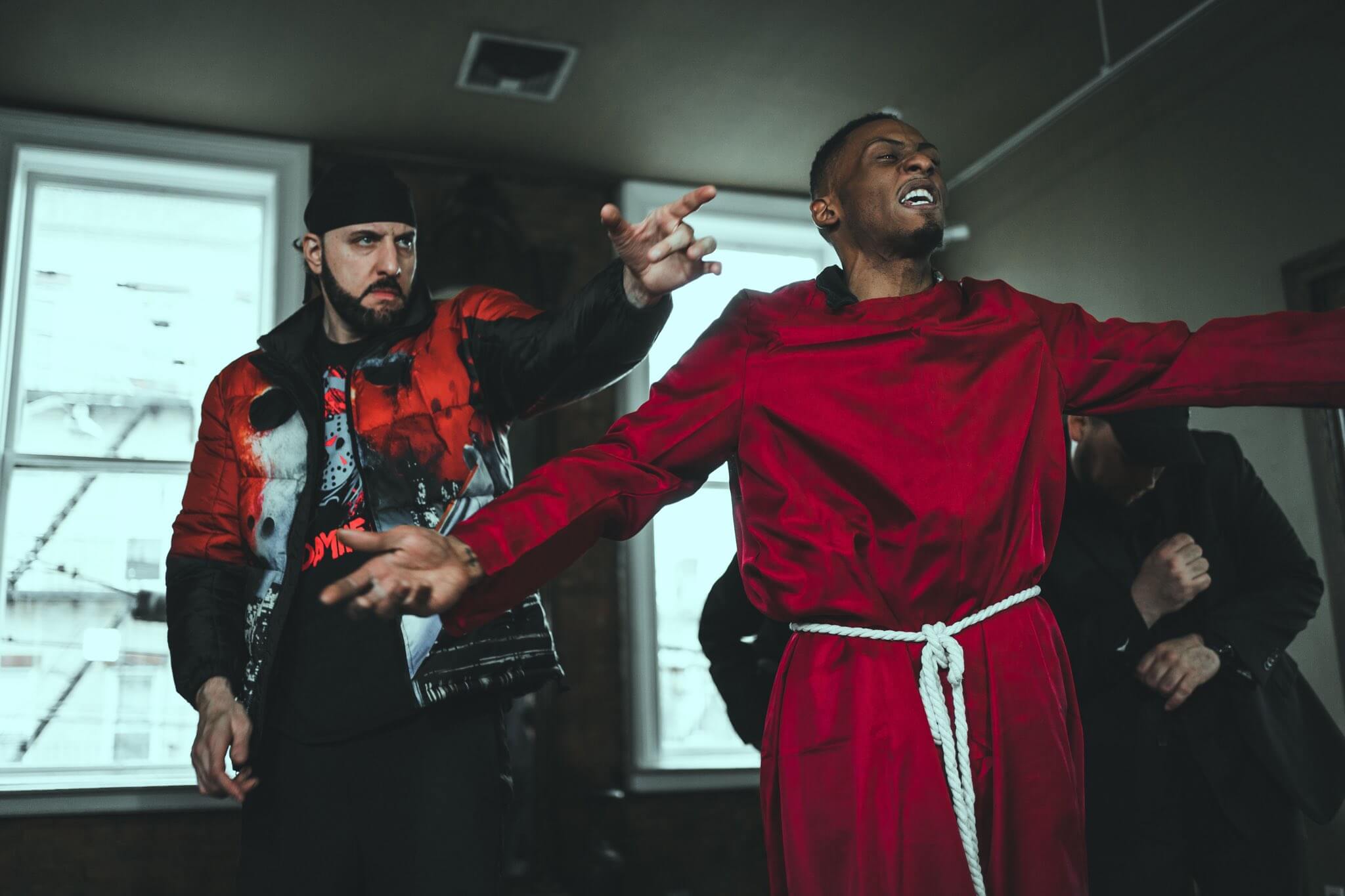 2nd Generation Wu’s iNTeLL would give out computers if he was a billionaire.

We had the opportunity of connecting with Dontae Hawkins, the son of Wu-Tang Clan’s founding member Lamont “U-God” Hawkins for an exclusive interview.

We discuss growing up in Staten Island, his new album with DLP Computers For The Hood, having a famous father, working with R.A The Ruggedman and more. He also breaks down some of the tracks on the new LP. Read our exclusive conversation with iNTeLL below.

Let’s start with your upbringing. What was it like growing up in Staten Island?

iNTeLL: It was pleasant, the early 90’s kids still went outside and people were kind to each other. After my accident in 1994 we moved to a safer part of the island and that’s where I continued my upbringing.

Is a lot of your music based off what you saw, and lived growing up?

Yes, but I grew up watching a lot of movies and television and spent a great deal of my childhood indoors developing my imagination, so its an amalgamation of everything I’ve observed and learned and how I feel about and also questions that arose along the way.

Did people easily recognize your father? When did you realize you had a famous pops?

I remember going out with my father and being stopped by strangers asking for pictures or his autograph and just wanted to share a story. He was usually pretty welcoming but sometimes when he was with me he preferred to be left to his day. I didn’t realize what “fame” was
until later on when I was in Jr high, but before that I had an understanding that my father made music and a lot people heard it. and he was on TV once in awhile which I thought was cool.

Besides rap, what else did you grow up listening to?

My earliest music memories consist of Disney musicals, reggae and the miseducation of Lauryn hill. Now after 25years of hip hop I find myself listening to more doo wop, rock & roll and jazz.

Can we expect an experimental jazz project from you sometime in your career? Or you’ll rather keep enjoying the music from the outside?

Maybe an experimental Jazz Doo-Wop album if anything.

At what age did you start taking your music career seriously?

I would say once I got to college and had access to a dorm room studio and my own computer, and I think Tunecore came out around that time after that I was more determined to be heard by the world and more importantly my father.

Let’s talk about Computers For The Hood. When did you start writing songs for the project?

So it was originally supposed to be a 5 track EP and I started in December 2020, but once we got the DEL feature that kind of reinvigorated me and made me want to see what other possibilities could I manifest.

Are you happy with how it turned out?

Honestly, when I started it I was very reluctant to even make music, but after hearing it the way I intellectually designed it I feel like this is my best work thus far, as an artist, as an engineer and as a producer and composer.

What inspired the title?

Titles are important, they need to stand out and make a statement. If I was a billionaire one of the things that would be on my agenda would be to give out computers to people with great potential that are just missing the tools. Also at my core as an artist I want to inspire and give the information to those that are looking and ready to receive it.

How did you link up with Del Tha Funkee?

That came about through the homie DLP #RespectTheProducer, he has a rapport with DEL and as they were building he mentioned he was working on a project with me and DEL mentioned he knew who I was, at that point DLP asks if he would be down to collaborate and after he heard my reference he was hype to be apart of it.

‘Now I Know’ is one of the hardest tracks on the LP. What inspired that one?

Most of the production I hand picked from DLP beat packs he sent quite a few, but that one was me letting DLPs true creativity shine and come to light. With Multiples mix and Lomels vocals it really brings me and meds hard bars to a space where angels be in a cypher with god.

‘Django Hardware’ features your wife Prema777, can you tell us about the discussions that led to her appearing on the track?

During the pandemic she began writing poetry again and she would share pieces with me from time to time. On the night I was mixing Django. I heard her writing and asked her to share and after she was done we were on our way to the studio.

Did Covid have an inverse effect on your creative process?

It did, not necessarily negative but I feel like covid drew a line in the sand and either you were putting work in or you weren’t. I think we both know which side I landed on.

What was growing up around members of the legendary Wu-Tang Clan like? Holidays must have been crazy.

Holidays were some of my favorite times, although I don’t have many experiences with wu members growing up it wasn’t until I got into my rap career and started building with them as an artist that the stories began to build.

Did they in anyway influence your decision to make music?

Absolutely, growing up immersed in the WU its embedded in me like a lyrical brand on my DNA sequence.

What were you doing before you started making music?

Writing short stories, and mini plays and saving them on floppy discs, going around the neighborhood trying to get the local kids to let me direct them and act out what I wrote.

Do you still write short stories and mini-plays? If you had to choose between acting and making music, what would your choice be?

You have an authentic hip hop street sound. Is your style largely based off your father or are you more focused on creating something for yourself different from what he had going on?

I would say our styles are vastly different, any influences would be in the aspect of being truthful and lyrical over dope production.

Is creating a legacy for yourself detached from Wu-Tang and your father’s achievements all that important to you?

It’s important to me in the sense that I’m not worried about that, eventually one of the many many things I do will get its just due and I’ll be known for that in addition to The Son of U-God, but in the meantime, I don’t mind being embraced as the heir to the creative legacy of the Wu-Tang Clan.

What expectations do you have for yourself and your music?

My expectations for myself …. leader of my free world, in the meantime my music will proliferate messages that uplift and inspire and in exchange I get to provide my family a great life.

When people ask you questions like these, does it feel like you’re being put in a box because of who your father is? Does that ever get annoying?

No not really, it’s expected, with hip hop being still so young we haven’t really seen many heirs of legacies try and do all the things I’ve done and plan on doing so I’ll gladly answer any questions that arise because I’m laying the foundation for the future me, figuratively and literally.

How do you deal with having talented MC’s around you?

If they happen to inspire me to create I try and capture the moment if not I humbly sit in the corner as the best in the room.

You have a wide range of collaborations on the album, from Method man to Rass Kass and more. How did you select who you wanted to put on it?

That’s actually a great question, the selections came about from a lot of random conversations with DLP and also god deciding to bless in in the right ways at the right times.

“Know The Gospel” is a Rolls Royce of a track. What was it like working with R.A. The Rugged Man?

It was amazing, having him even respond to the request was shocking. Then after delivering a dope ass verse he then offered to come to Staten Island to shoot the video. He’s not only one of the dopest artists he’s also one of the best human beings I’ve ever had the pleasure of knowing.

Do you have a favorite track on the LP?

Currently I enjoy driving around bumping track 6 Beastside Staten featuring another Legend in the making repping Staten Island, Eddy I.

Stream Computers For The Hood below via Spotify.