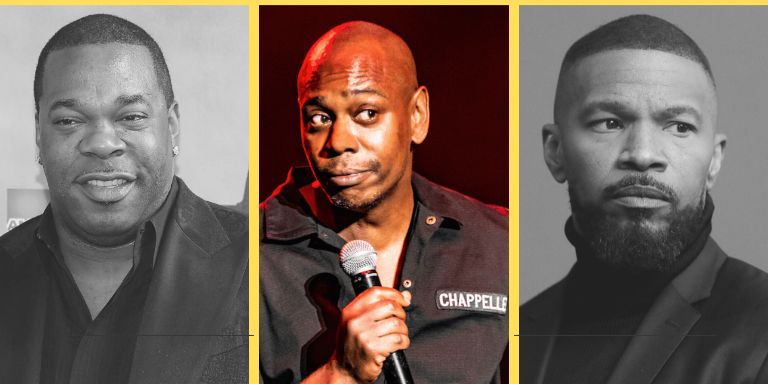 Dave Chappelle confirms Busta Rhymes and Jamie Foxx Jumped Man That Tackled Him On Stage, But Says They Didn’t Hit Him

Dave Chappelle was attacked on stage by a 23-year old man during his set at Netflix’s Is a joke festival at the Hollywood Bowl in Los Angeles Tuesday night (May 3).

According to multiple reports, the audience member – Isaiah Lee – ran on-stage and lunged at [Chappelle] knocking him to the floor,” as he neared the end of his set.

After the assault, the attacker tried to run off the stage but was tackled and jumped by Chappelle’s security team.

Dave celebrated the beatdown his attacker suffered and thanked his friends, including Busta Rhymes, Jon Stewart and Jamie Foxx for coming to his rescue.

“I felt good my friends broke his arm. I felt good, how bad does a n-gga have to be that Jon Stewart would stomp him!” Chappelle joked. He also brought Jamie Foxx to the stage to thank him for participating.

“Whenever you’re in trouble, Jamie Foxx will show up in a sheriff’s hat.”

The attacker was arrested for assault with a deadly weapon, and was taken to a hospital for treatment. it’s unclear if he may lawyer up, but to ensue neither Foxx, Rhymes and Stewart are dragged into a legal battle in the future, Chappelle is absorbing them from any wrongdoing.

Dave’s spokesperson, Carla Sims per TMZ says “Dave’s comments were simply part of his ever-evolving act and that none of the 3 guys threw a punch or otherwise participated in the takedown.”

TMZ also reports Dave’s attacker won’t be charged with a felony by the L.A. County D.A. and that the case has been passed to the city attorney for misdemeanor consideration.

The Netflix Is a Joke comedy festival kicked off April 28 and runs through May 8.