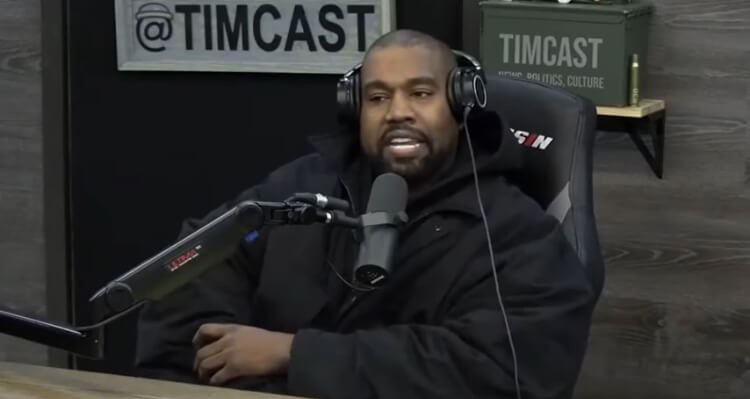 Kanye West stormed off from a podcast interview after the host challenged his negative views on Jewish people.

While there, Ye wasted no time in jumping on the public’s pushabck of his antisemitic remarks. Ye offered a dictionary definition of what he feels an antisemite is and questioned how it can be antisemitic to say Jewsih people run institutions and Hollywood if it’s true.

“I just want to get straight to the heart of this antisemite claim that’s happening. This is something—if you read the definition—it says you can’t claim that there’s multiple people inside of banks or in media that are all Jewish or you’re antisemitic. And that’s the truth. Like it’s the truth. What are we talking about?”

The host interjected and asked him to clarify his statements, to which Kanye responded saying “I’ve been labeled anti-semite…There’s different beliefs about our bloodlines… like the documentary that Kyrie [Irving] posted. In general, America has been left ignorant and history has been changed, so when we start questioning things that question the indoctrination then you immediately get… demonized, demonetized, and what’s so beautiful about this time is everyone got to see what’s really been happening.”

From there, the conversation moved into identity politics. Ye revealed they tried to “put me in prison,” debanked him, and that adidas froze his bank account just when he was trying to buy his own bank, which he says cost about 50-75 million.

As the interview progressed, Ye doubled down on his antisemitism, and how the media keeps trying to keep him quiet. At that moment, the host said “I think they’ve been extremely unfair to you.”

“Corporate press,” Pool responded. “I’m not using–I don’t use the word the way I guess you guys use it.”

“It is ‘them’ though isn’t it, because when you think about it, consider it, in 2018…” Fuentes said before being cut off by Ye, who asked, “What do you mean it’s not?”

Ye, seemingly unimpressed by Pool’s refusal to drop a name decided to walk out of the interview. “You leaving?” Pool asked, adding, “He’s gone.”

Later on during the podcast, a producer says Ye, Milo and Nick all left together in a car, claiming Ye told producers he wasn’t angry with Tim, but his issue was getting cut off.

Ye has been on an anti-jewish campaign of late, spreading hateful conspiracy theories about Jewish people owning entities. His problematic comments have not just hurt his career, but his realtionships as well. In a recent interview with Los Angeles Times, former president of West’s now defunct G.O.O.D. Music label, Pusha T said he has been disappointed by Kanye’s recent remarks on the Jewish community.

“It’s definitely affected me. It’s been disappointing,” Pusha said. “As a Black man in America, there is no room for bigotry or hate speech. So yeah. It’s been very disappointing, let’s talk straight.”