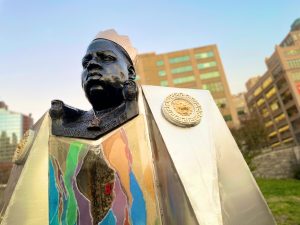 The late Notorious B.I.G.’s legacy continues to live on. The hip-hop legend, who was gunned down in 1997 has been honored with an art installation at the entrance to the Brooklyn Bridge.

The over 9-foot-tall interactive sculpture designed by local artist Sherwin Banfield is installed at the northeast corner of Prospect Street and Washington Street. The sculpture made of stainless steel and bronze is decorated with Biggie’s first studio album, and features a crowned head of the Brooklyn native. The design also includes Biggie’s famous Coogie sweater, a neon heart that says “spread love” — and an audio system playing some of his popular tracks.

Styles P Details What Makes The Notorious B.I.G. The Greatest Rapper Of All Time

“I wanted to create something monumental, something regal to coincide with his king of New York status,” Banfield told the Brooklyn Paper about his design. “He was king of New York [and] he was well-known, well-loved. I hope this dedication to him and his family is appreciated by the community and by the culture as a whole.”

The statue was a collaborative effort between the Downtown Revitalization Initiative and The Downtown Brooklyn + Dumbo Art Fund. Banfield notes he had previously sketched out a design for a monument dedicated to Biggie and jumped at this opportunity after his cousin told him about it.

“The location had a profound impact on the work… It’s on a hill, and I wanted viewers to ascend towards a regal monument and be welcomed with open arms and two essential human qualities: the voice through a microphone and love via a heart.”

Banfield’s artwork titled Sky’s the Limit in the County of Kings was selected by a panelists out of several proposals submitted to help celebrate hip-hop’s 50th anniversary, which is next year.

“We were really, really careful once we received all these wonderful proposals to make sure that we were choosing projects that really spoke to what was unique about downtown Brooklyn and Dumbo — pieces that really activated our neighborhood with really forward thinking and provocative work and I think this piece really fits into that way of thinking,” said Regina Myer, president of Downtown Brooklyn Partnership.

The new public art installation will be available for visitors and fans to see the spring of 2023.

Biggie, born Christopher Wallace was just 24 years old when he was killed by a still-unknown shooter.