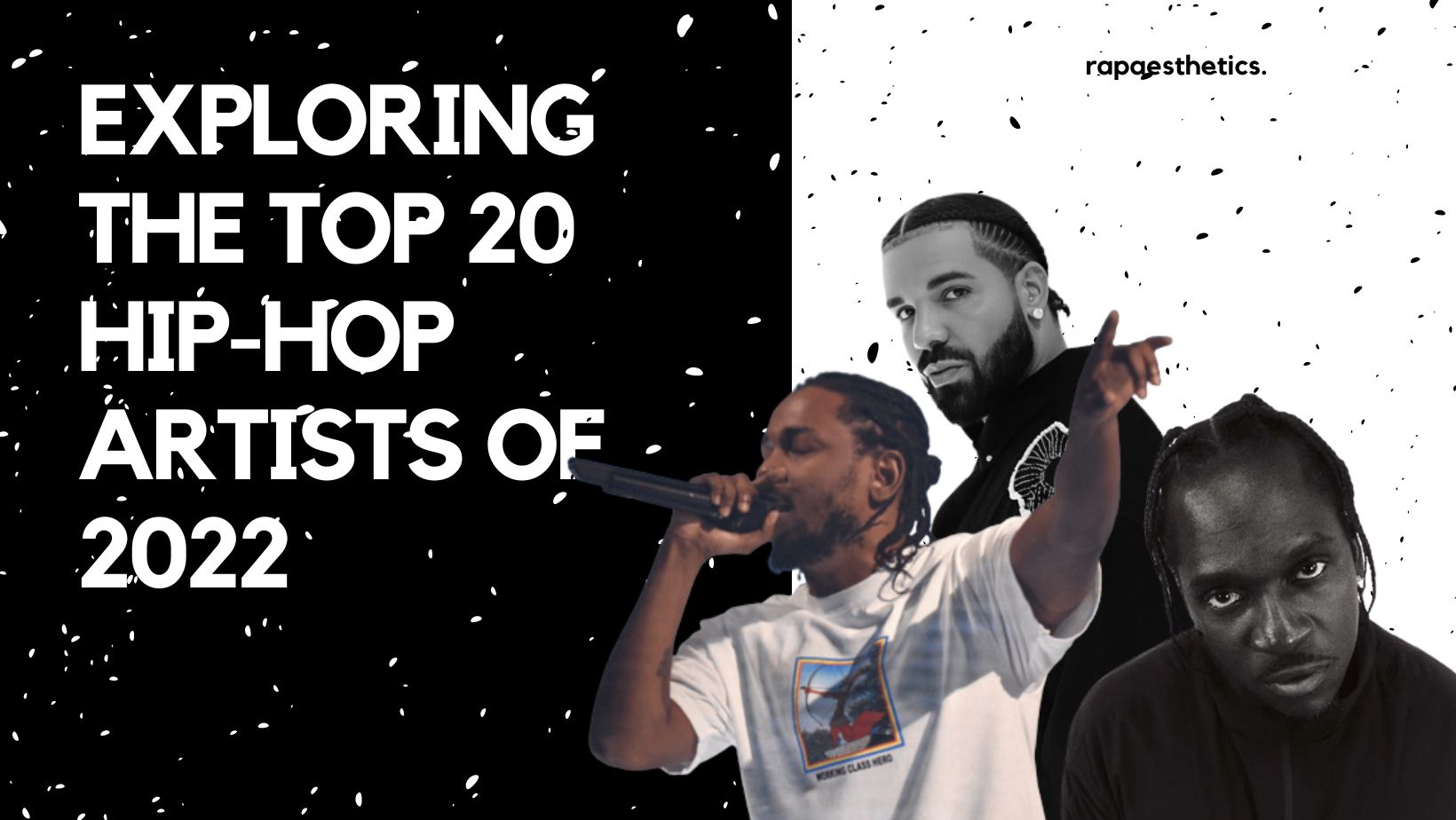 In this blog post, we will explore the top 20 hip-hop artists of 2022 and see who is the best rapper of the year.

The music industry is constantly evolving, and new artists are emerging every year. The competition is tough, and many rappers are vying for top honors. With the help of streaming platforms, fans are now exposed to more music than ever before. As a result, it is important to recognize the best rappers of the year and give them the respect they deserve.

The hip-hop industry is filled with talented artists, and it is hard to narrow it down to just 20. However, after much deliberation, we have managed to compile a list of the top 20 hip-hop artists of 2022. They are:

These 20 rappers made a significant impact on the music industry in 2022 and kept us talking. Let’s take a quick look at some of their exploits.

Drake is the best rapper of 2022. This year the Canadian native broke existing records and established new ones in his image. His collaborative album with 21 Savage “Her Loss” had the biggest Hip-Hop first-week debut of the year, and included the number one record “Rich Flex,” which helped him overtake the Beatles for most Top 5 singles in history. In addition to dropping two distinctive albums in 2022, Drake contributed impressive verses on records with the likes of Jack Harlow, and Future. Drake remains untouchable in the streaming era.

Pusha T has stayed true to his street tales all through his career, and has orchestrated his greatness using nothing but coke raps. His new album “Its Almost Dry” has been ranked one of the top albums of the year by several top publications, including Rolling Stone, who wrote glowingly about the rapper’s career. The album has been praised for its production and lyricism that both display his maturation and his ability to keep listeners fascinated with his knowledge of the white powder. King Push would be hoping the success of the album translates to a long overdue Grammy win in 2023.

Kanye West was the most talked about hip hop artist of 2022, and all for the wrong reasons. This year we basically watched his life fall apart. In addition to losing his wife, Ye lost his prized-billionaire status after several top brands, including Adidas severed ties with him following a reoccurring belligerent actions and anti-semitism.

2022 was the year a lot of people, including this writer took NBA YoungBoy seriously. His work ethic was never in doubt but his star power really blossomed this year. Youngboy Never Broke Again slaved hard in 2022 and was almost guilty of running himself to the ground, releasing an insane 7 projects and countless singles in the calendar year. Despite not having a favoring personality, the YouTube legend continues to do unprecedented numbers without huge promotion budget and elaborate marketing.

Nas is one of the most acclaimed and influential rappers of all time, and at 49– he’s still scarily good. Regardless of what anyone may think of his relevancy in today’s music, only a few of his peers are still capable of rapping at his level. The Queens Bridge legend gave us one of the best albums of the year with King’s Disease 3– the final chapter of his King’s Disease trilogy, which started in 2020. Nas has found new life with Hit-Boy and we hope the two continue to create magic.

GloRilla had a 2022 to remember as she managed to keep everyone talking musically and socially. The Memphis newcomer dropped arguably the two biggest songs of the year in FNF and Tomorrow 2. The summer anthem “F.N.F.” propelled her into stardom this year, reaching No. 1 on Mainstream R&B/Hip-Hop Airplay and peaking at No. 42 on the Billboard Hot 100 as well as inviting a deal with Yo Gotti‘s CMG label in July. The HitKidd produced hit single also earned her a coveted spot in the best rap performance category in the forthcoming Grammys. Additionally, She released ber debut project in 2022, which debuted at no. 31 On the Billboard 200. No other female rapper had a better 2022 than young Glo.

Future’s “Wait For U’ featuring Drake and buzzing Nigerian singer Tems is one of the biggest songs of 2022. The track helped introduce Tems to a broader audience as well as solidify Future’s hit making prowess. The album the song lived on I NEVER LIKED YOU was one of of only four albums to earn platinum status in 2022.

It’s no secret that J.I.D. released one of the best storytelling Hip hop albums of 2022 in The Forever Story. Pitchfork describes it as a “a bridge between his upbringing and his place within hip-hop canon and Black history at large.” It’s been nearly four years since his last solo project, but the Atlanta rapper shows no signs of rustiness with his delivery, as he shares compelling stories about his life and family.

Kendrick Lamar’s latest album ‘Mr. Morale & The Big Steppers’ which was released as his last album under Top Dawg Entertainment has been met with critical acclaim. The production is top-notch, the lyrics are thought-provoking and the themes explored throughout are captivating.

Young Thug enters our list solely off the back of his ongoing RICO case, which could see him spend the rest of his life behind bars if found guilty. Before his arrest in March, Thug was active musically and helped craft one of the best songs of the year in Gunna’s Pushin P.

Jay-Z is one of the most successful rappers of all time and no longer needs to rap. In between hustling business deals, the Roc Nation founder manages to find time to support his friends. In 2022 Jay-Z commanded attention with his verses on Pusha T’s Its Almost Dry track Neck & Wrist, as well as the largely dissected God Did verse on DJ Khaled’s 13th album. When Jay-Z raps, the world stops and listens.

Wait, Kodak Black? Yes, him. Kodak Black is not tbe flashiest name on this list, but readers need to realize the best rappers for a giving year focuses on the output for that giving year, rather than past achievements. The Pompano Beach rapper is one of the most controversial names in the industry due to his seemingly lack of filter when discussing sensitive topics. In 2022, Kodak kept the controversial moments to a minimum, and received plaudits for his work ethic, which saw him release three projects this year.

When it comes to female rap, Nicki Minaj remains the queen. She may have missed out of a Grammy nomination this year, but her achievements continues to speak for itself. Her 2022 single “Super Freaky Girl” earned the largest solo debut ever for a female rap song on Spotify, and additionally became the first solo song by a female rapper to debut at number one this century. Give Nicki her flowers.

Megan Thee Stallion released her long-awaited debut album ‘Traumazine’ in 2022. The album had a respectable showing on the chats after a modest first week sales. But still, it’s her events from 2020 with Tory Lanez that has made the most headlines. Meg was embroiled in a messy trial with Canadian rapper/singer Tory Lanez. The trial follows the 2020 shooting at Hollywood Hills, in which Tory Lanez is said to have shot the Hot Girl rapper in the foot. Though Lanez claims he’s innocent, a jury convicted him of all three charges against him in December. He faces 22 years in prison and deportation.

Cardi B’s sophomore album is still nowhere to be seen but she started enough social media drama in 2022 to take our minds off the music. Additionally, she gave us what is undeniably one of the best verses of the year with a confident display on GloRilla’s Tomorrow 2.

Freddie Gibbs is finally starting to get the acclaim he believes he deserves, while he seemingly no longer cares for it. With $oul $old $eperately, the Gary, Indiana rapper gives newcomers his origin story, a befitting way to kick off his new journey with Warner Bros.

Earl Sweatshirt’s Sick album went under the radar. Released in January, the 10-track album delves into subjects pertaining to coronavirus pandemic and its subsequent lockdowns. You’re considered one of the best rappers of a year when you release a project like this.

Why is A$AP Rocky here? He didn’t even drop an album. True, but he became a first time father in 2022, which is an achievement in itself. But seriously, Rocky made a comeback in 2022 with the release of several new songs, including “Doja,” “Arya” and “Shittin Me,” which appeared on the soundtrack for ‘Need for Speed Unbound. Additionally, the A$AP Mob rapper announced his new album — the long-awaited follow up to 2018’s Testing— is set to drop in 2023.

J. Cole is one of our top rappers of the year. Despite not releasing an album in 2022, the Fayetteville rapper remained relevant and kept his name in rotation with stellar guest verses. He didn’t do enough in 2022 to appear higher on our list, but he certainly did enough to secure a position.

RIP Takeoff. The number 20 position is dedicated to the late Migos rapper, who was accidentally killed during a dice game in the early hours of Tuesday (November 1). Prior to the tragic incident, Takeoff teamed up with Quavo for the release of the Wu-Tang Clan inspired ‘Only Built For Infinity Links.’