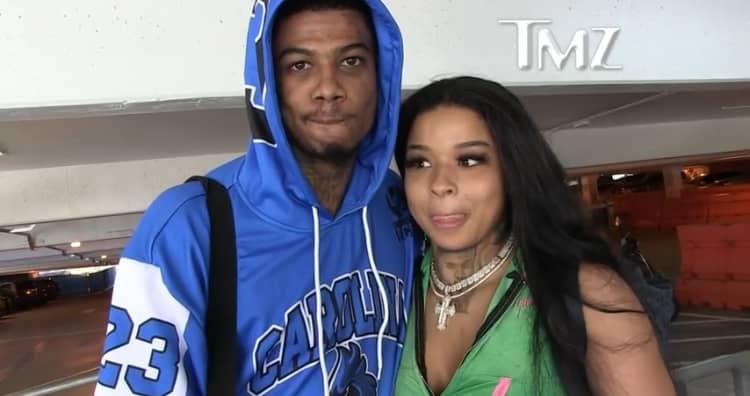 Blueface and his girlfriend, Chrisean Rock have succeeded in drawing a lot of attention to themselves with their constant fights on social media and in real life. Their relationship is a red flag and should not be emulated. You can read more on their life and squabbles here.

Following the backlash that accompanied their latest display, which ended up with Chrisean Rock being charged with criminal trespass and disorderly conduct. The couple are seemingly turning over a new leaf and have decided to maintain the peace in their relationship. They made the unforced declaration during a quick conversation with TMZ on Monday (Aug. 29) at LAX. While cuddled up with her boyfriend, Chrisean promised to keep her hands to herself both in private and public because she doesn’t want to go to jail again.

As mentioned earlier, Rock was arrested last week in Arizona for hitting the Thotiana rapper in the face, while they were in a Whiskey Row bar in Scottsdale. When asked of the possibilities of such an attack happening again, Rock tried her best to dismiss the question, however Face told the TMZ photog that he remains fearful of her actions.

“I’m worried, I worry every day. I go to sleep at night, shaking,” Blueface said jokingly to the dismay of Rock who was starting to get visibly upset by his response.

You can watch the full conversation below.