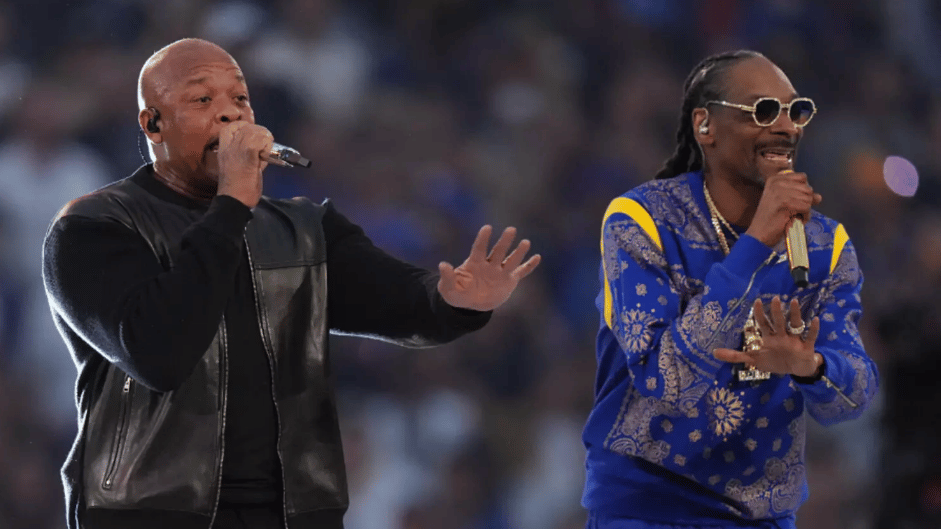 Serving as the show’s anchor, Dr. Dre started things off with “The Next Episode,” his 2000 single featuring Snoop Dogg. From there, the two – atop a white set designed to resemble Compton buildings paid tribute to Tupac with a performance of “California Love.”

Kendrick Lamar remains MIA in the music scene, but was on ground to deliver a chilling performance of his anthemic single “Alright,” and “Maad City” with a troupe of dancers. Unfortunately for fans, the 34-year-old didn’t perform any new music or provide hints about the long-awaited follow-up to 2019’s Pulitzer-winning DAMN.

There was barely any time to catch your breath before Eminem appeared for a performance of “Lose Yourself,” from 8 Mile. As the song ended, the 49-year-old Detroit legend took a knee in support of Colin Kaepernick, the former 49ers Quarterback who remains blackballed from the NFL for choosing to take a knee in 2016 during the U.S National anthem in protest against police brutality and racial violence.

Dr. Dre closed out the historic set with a piano rendition of Tupac’s “I aint Mad At Cha” and his 1999 hit “Still D.R.E,” and made it clear that he’s “still not lovin police.”

Despite being short, the set was memorable and social media had a lot to joke about. Check out some reactions to Dr. Dre’s Super Bowl LVI halftime show below.