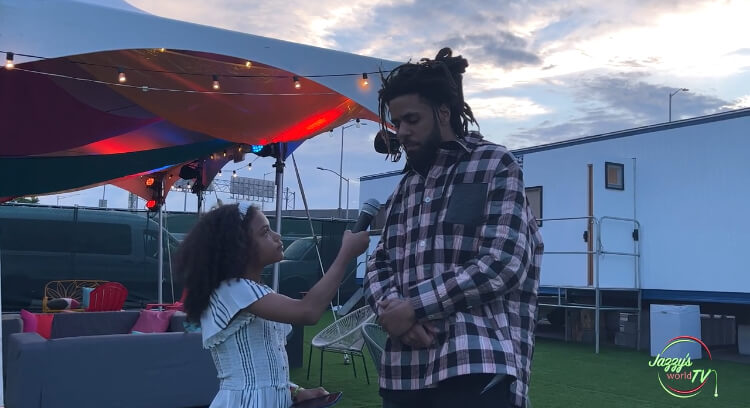 During their quick chat, Jazzy reminisced on her run in with Jay-Z, and how an interview with the Hip-Hop mogul changed her life. She also touched on Cole’s big break with the Roc Nation founder, and why it’s important to stay persistent with your visions.

50 Cent Details Why He Didn’t Sign J. Cole To G-Unit

He continued, “I feel like persistence is important because if you really truly love something and you truly believe, you should just do it for the love, and even if you don’t get to where you were trying to go, you’re still doing it for the love.”

The 12-year old Bushwick native told Complex she wanted to use her platform to “inspire other people to stay persistent in their goals and their dreams.”

“We all have a purpose on this Earth and in order to gain that purpose, we need to work on it,” she said, before giving a special shout-out to Dreamville member, J.I.D., for making the interview with one of her “favorite rappers” possible.

“I I also want to give a big shout-out to J.I.D who played a major role in making the interview happen. I’m grateful. Thank you, J.I.D.”

Jazlyn “Jazzy” Guerra first made waves in 2021 following her viral interview with Jay-Z, in which she asked the rap billionaire how people could become successful like him.

When Jazzy asked what kept him motivated to stay on his grind in his career, the 23-time Grammy winner complimented her for the question. “To represent for a whole culture of people,” he said. “It’s bigger than myself. I know every time I open a door it opens the door for someone like yourself to be successful.”

“I’m usually nervous, like a lot, before my interviews,” she said per abc7. “But I turn that nervousness into excitement.”

“I’m always talkative, and I like to learn more information about people,” she said. “Also, I like to, you know, kind of get the inside story.”