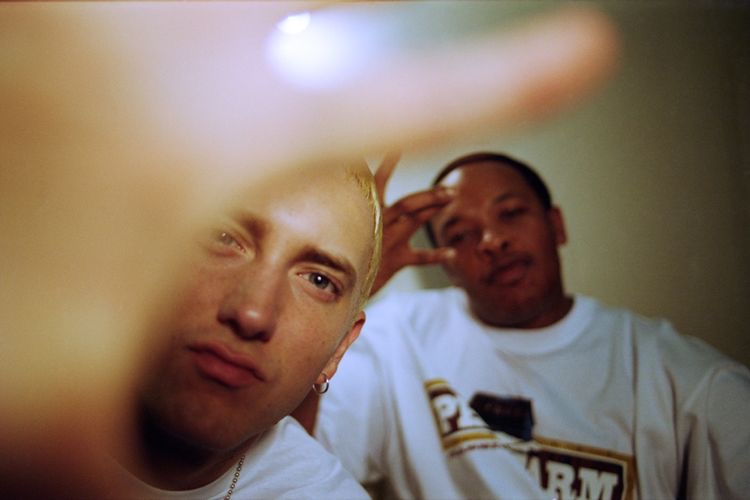 Over 20 years ago Dr. Dre signed Eminem to his Aftermath imprint after Interscope founder Jimmy Lovine played him a demo-tape by the Detroit rapper.

During his speech inducting the now 50-year-old into the Rock & Roll Hall Of Fame, Dre explained he wasn’t aware Eminem was a white guy, and joked about how ‘fucked’ up he was when Jimmy Lovine later told him.

“Over 20 years ago, Jimmy Iovine, who is also one of tonight’s inductees and one of my best friends, played a demo tape for me from a guy who called himself Eminem,” Dre said in his speech. “The first thing I said when I heard it was, ‘What the fuck did he just say?’ I loved it so much that I couldn’t stop listening to it.

“A few days later, Jimmy called me and said, ‘You know he’s a White guy, right?’ Fucked me up!” Dre continued. “Looking back, I don’t know why it didn’t cross my mind. He certainly didn’t sound like a Black rapper, especially because of what he was saying. I guess it was my ignorance at the time, thinking that if you’re a really good rapper, you must be Black.”

During the lengthy speech, he also revealed he was discouraged from working with the then-unknown artist due to the color of his skin, but decided to take a chance because Eminem’s “gifts were undeniable.”

Eminem, whose real name is Marshall Mathers was reportedly star-struck when he first met Dr. Dre. “I’m looking at Dre like, ‘Dude, I see you on TV all the time — you’re one of my biggest influences ever in life,” he said, according to Billboard. And it didn’t take long for them to get to work.

On February 23, 1999, Eminem rewarded Dre’s gamble with the release of his The Slim Shady LP. Propelled by the lead single, My Name Is, The Slim Shady LP debuted at number two on the Billboard 200 and number one on the Top R&B/Hip-Hop Albums chart, and went on to become the label’s first successful album release. The album won Best Rap Album at the 2000 Grammy Awards, while “My Name Is” won Best Rap Solo Performance. In 2000, The Slim Shady LP was certified quadruple platinum by the Recording Industry Association of America (RIAA).

Though Dr. Dre, born Andre Young was already a staple in hip hop, it was his subsequent mentorship of the then-up-and-coming performer that, in part, cemented his reputation not only as an artist, but as a kingmaking producer. Dre took the younger rapper under his wing, collaborating with his protege on best-selling albums such as The Marshall Mathers LP and The Eminem Show, as well as hit songs “The Real Slim Shady,” “Still D.R.E.,” and “Forgot About Dre.”

Their relationship has since blossomed into one of the most celebrated in entertainment. And while the realm of hip-hop is well-known for it’s myriad feuds, the connection between Eminem and Dre has seemingly stood the test of time, with Eminem calling Dre “a father figure to him.”

Em has often alluded to The Chronic creator saving his life a couple of times in interviews and on records.

“Where’d the man, where did Dre go? The man who saved my life, ladies and gentlemen, Dr. motherf-ucking Dre,” said Eminem during his Rock & Roll Hall Of Fame acceptance speech.

He rapped about his relationship with Dr. Dre on the 2011 song I Need A Doctor, alluding to the super Producer saving him when he was at his lowest.

“I don’t know if I was awake or asleep when I wrote this/All I know is, you came to me when I was at my lowest/You picked me up, breathed new life in me, I owe my life to you,” he rapped.

On the same track, Dre talked about how Eminem was the only one to stay consistent when he needed his friends.

“Went through friends, some of them I put on, but they just left/They said they was ridin’ to the death/But where the fuck are they now, now that I need them?/ I don’t see none of them, all I see is Slim/Fuck all you fair-weather friends! All I need is him.”

On February 13, 2022, the dynamic duo reunited to perform at the Super Bowl LVI halftime show alongside Snoop Dogg, Kendrick Lamar, and Mary J. Blige, with surprise appearances from 50 Cent and Anderson. Paak.

How Did Dr. Dre Sign Eminem To Aftermath Records?

An intern at Interscope Records brought Eminem to the attention of the label’s CEO, Jimmy Lovine after Eminem came second during the annual Rap Olympics in 1997. He saw Eminem’s potential and handed the rapper’s demo tape containing six songs including three instrumental tracks – all original work to Lovine who was blown away. When he had Dr. Dre listen to Eminem’s demo tape, the legendary producer was hooked from the beginning.

“In my entire career in the music industry, I have never found anything from a demo tape or a CD. When Jimmy played this, I said, ‘Find him. Now,’” Dre recalled on an episode of The Defiant Ones.

Dre admitted that his associates had their uncertainty about him signing a white rapper, “I come up with Eminem, this white boy,” he said. “My general manager had these eight by ten pictures of him, and he’s like, ‘Dre, this boy got blue eyes! What are we doin’?’”

But Dr. Dre was confident in his decision. “I don’t give a f-ck if you’re purple; if you can kick it, I’m working with you.”

Here are some of the best Eminem & Dr. Dre Songs

My Name Is – Eminem

Cleanin’ Out My Closet – Eminem