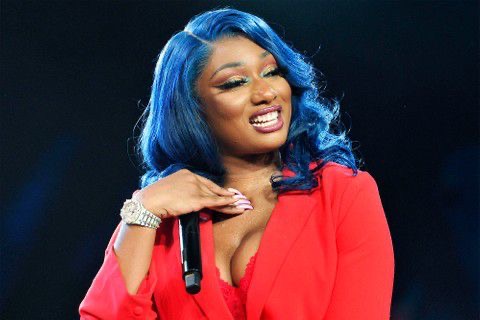 Megan stated that they were both in Miami and that she couldn’t let the ATL rapper leave the city without recording a verse for her album.

“It’s a really crazy story,” she began. “I had the beat for Pressurelicious… and I recorded the song and I recorded it one way. And I’m like ‘you know what, this would really sound hard if Future was on this shit.”

“So how I went about it was, okay, somebody figure out what Future feature price,” she continued. “I was just asking what’s his feature price…and they was like okay 250. He wants 250K.”

Megan says Future sent her a number of versions of the song, which she had to piece together. The 27-year-old also added that she had to rewrite new verses so everything would sound cohesive.

“When I got his verse, I was like ‘I gotta write some new verses’ cause I gotta make this make sense,” she said. “So then I got in the studio with my engineer and then I put the song together and I was like ‘this makes sense.’”

“Traumazine” is Megan Thee Stallion’s second studio album, and first album in 21 months. Earlier this week, she explained the message behind the album in a social media post.

“It took a lot of self-reflecting to get to the point in my life where I am right now… I ain’t saying I finally figured everything out or that I’m finally at peace, bc I’m not… buttt im excited for the hotties to get a better understanding of what’s happening in my head #TRAUMAZINE,” she wrote.

During her appearance on ”Good Morning America” on Friday (Aug. 12) as part of the Summer Concert Series. Megan said she was “nervous” to make this album because she talks about her “real feelings” on it.