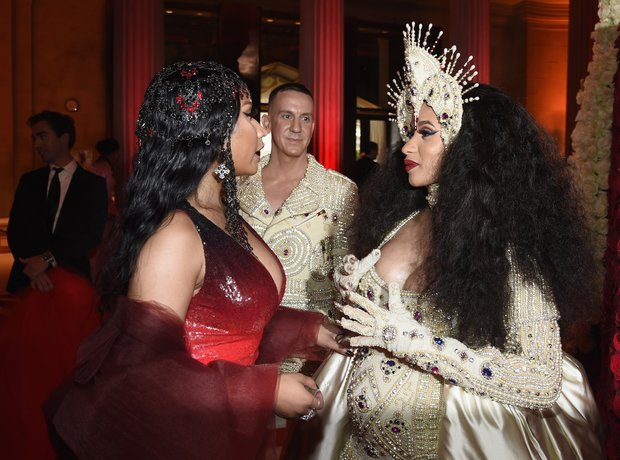 Nicki Minaj And Cardi B Shade Each other On Twitter

The internet manufactured feud between Cardi B and Nicki Minaj doesn’t seem to be going away anytime soon, and unsurprisingly, continues to heat up.

This week, Nicki Minaj made Spotify history when her new single “Super Freaky Girl” earned the largest solo debut for a female rap song on the streaming service. Prior to her achieving the milestone, Cardi B reacted with “Go stream” to a Nicki Minaj stan account that questioned why she is always presumably searching for “hate” on social media. The fan also noted the disappointing chat performance of her comeback single “Hot Shit” with Kanye West and Lil Durk.

Not exactly sure if Cardi’s comments triggered the events that followed, but in a short while “Super Freaky Girl” broke the record for the biggest solo debut of all time by a female rapper on the Global Spotify chart (3 million) and Spotify US (1.5 million).

Nicki, who is very much in tune with the antics of her Barbz, celebrated the milestone by shading Cardi B on social media. “Imagine telling the Barbz to go stream’ then they break a whole spotify record,” she wrote mockingly in a since deleted tweet.

“Super Freaky Girl” looks poised to debut at No. 1 on the Billboard Hot 100 this week, and is currently her highest solo No. 1 song on the US iTunes. If the track debuts at the number one spot, it would become the first solo No. 1 record of her career and third in total. She could also become the first female rapper in this century to debut a solo song at no. 1.

Cardi B reacted to Nicki’s new historic achievement by saying, “This week just prove what we been saying for years…..Im part of people marketing plan.I refuse to help if I don’t get pay,” she wrote on Twitter.

Barbz in the comments and quoted replies of continued to antagonize Cardi, with some offering clarity that the song was already performing well on Spotify before she got involved.

“Before Nicki tweeted that tweet that got her mad, the song had already debuted with over 3m streams, broken the record for biggest debut for a female rapper on Spotify and top 10 on Apple music, so idk the marketing plan she talking abt.”

A Brief Timeline Of Nicki Minaj And Cardi B’s Beef

Back in March, 2017, Nicki Minaj allegedly liked a comment dissing a video freestyle Cardi B posted on her Instagram page. A fan captured screenshot appeared to show the 40-year-old liked a comment that read “dumb a** bars”.

However, Nicki was spotted dancing to ‘Bodak Yellow’ a few weeks later in a Miami nightclub.

“I heard these labels are trying to make another me / Everything you’re getting little hoe is because of me,” Minaj spits on the track. Many believed this to be a Cardi diss, but she quickly dismissed the speculations.

The feud between the pair heated up during New York Fashion Week at Harper’s Bazaar Icon party in 2018 when photos and video of a physical altercation between Cardi and Nicki’s parties circulated the web. Cardi reportedly approached Nicki’s table aiming to resolve their issues, However, after being elbowed in the face, Cardi then attempted to fight and also threw her shoe into the melee.

Since then, their public feud has intensified, with a series of explosive Instagram videos and rants.